I have been fairly strident about the need for lower rates — ignoring some of the commentators that are generally well informed with regard to what the RBA is thinking. This may appear to be pig-headed hubris, as I’ve not fully explained my thinking — this post is an attempt to flesh out the dynamics that I see as the primary story influencing the Australian Economy just now. 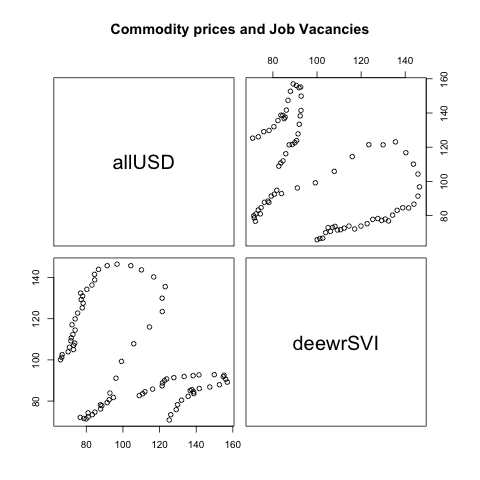 First of all, we have the well known end of the commodity price boom. Some claimed that it never really lifted the economy — but I think that’s untrue. The reason i think it’s untrue is that the cycles in job advertising look closely related. Clearly, there’s a lot more going on in this sample, and anyhow we have two trending series — however for the period under under consideration (2006+) the relationship is also there in differences. 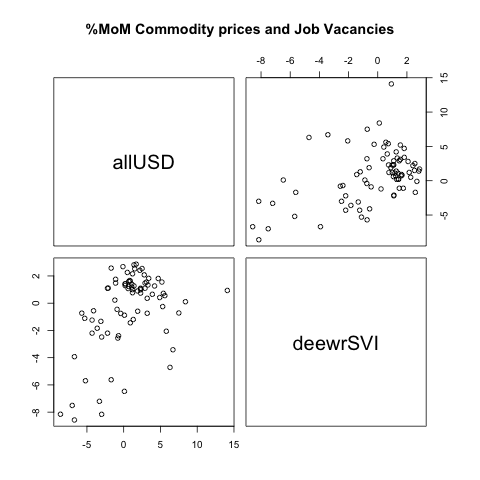 You can see in the below chart, that there appears to be some relationship between Commodity Export Prices, the AUDUSD, and job vacancies. This is the relationship we are interested in — as it’s the one that’s changed in a way that’s a major negative for the employment outlook. 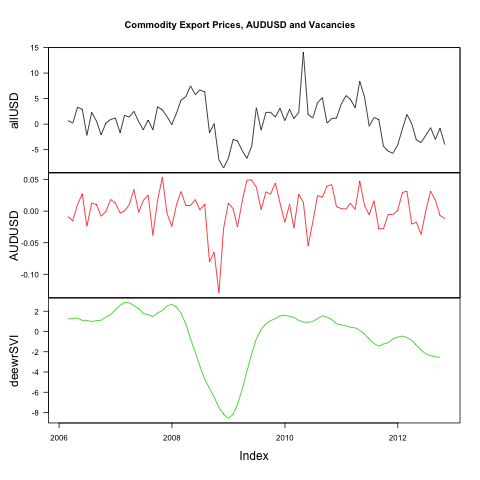 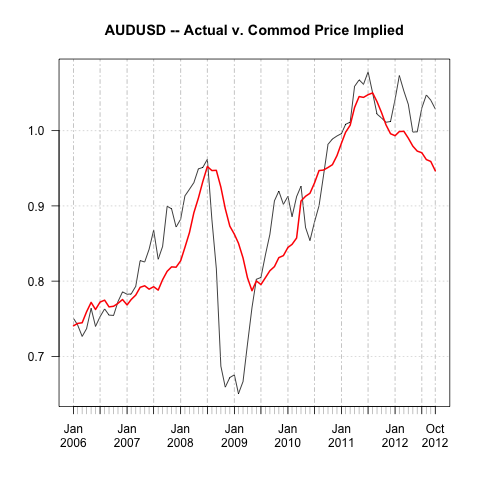 The above chart shows the AUDUSD exchange rate, and the value predicted by the USD price of AUD commodities (alone). The missing variables are Australia’s desire for foreign imports and financial claims on the rest of the world, and rest of the world’s desire for AUD financial assets and the quantity of Australian Exports. Thus, this analysis assumes that all these other thing balance out. 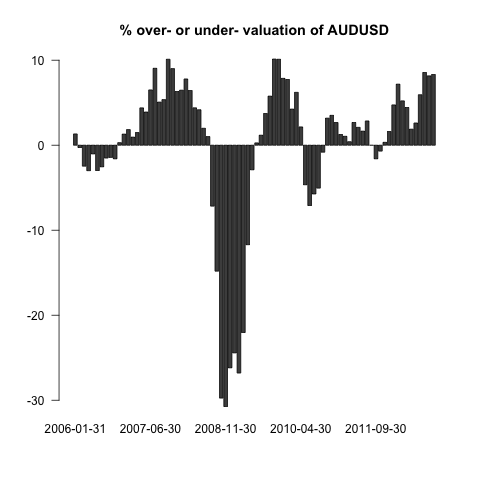 This gives a neat and clear interpretation of the residuals — the degree to which these things have not balanced out. I think there are two major changes that explain why the AUDUSD is higher than export prices suggest it should be: 1/ a large increase in foreign demand for financial claims on Australia; 2/ a modest increase in export volumes. A partially offsetting change is an increase in Australia’s demand for foreign goods — due to internet shopping.

The conclusion of this analysis is that the AUDUSD exchange rate is about 10% stronger than is consistent with the historical relationship with commodity export prices. 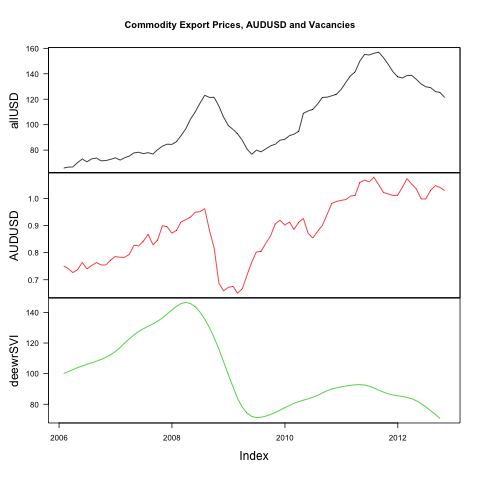 This last step, is, unfortunately, a little harder to show without a sophisticated modelling framework. Anyhow, note in the above chart that AUD FX fell prior to the export price crash, and bottomed out before either export prices or vacancies. This is why monetary conditions indices are difficult to get right. Anyhow, the problem at hand is that if we simply regress one on the other ‘rich’ FX predicts increasing job ads, and ‘cheap’ FX predicts falling job ads.

So we need something more subtle. This takes the problem outside a simple blog analysis. However, put your thinking caps on and walk with me this last mile. If you accept that ‘cheap’ FX is stimulatory (it raises the return on capital in the trade exposed sector), then you must agree that a ‘cheap’ AUD boosted firms, and therefore prevented more widespread closure — and hence labor shedding. This shows up in our analysis as a reduced decline in job advertising. 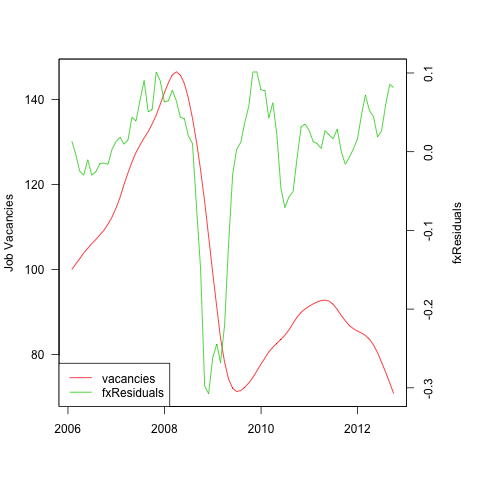 It is this relationship that has changed this cycle — the AUD is not going down in anticipation of export price weakness. Export prices are falling, and the AUD is steady. As a result, firms are shedding labor, and job advertisement is declining (the level is now below the GFC low).

Clearly a fuller model is required, but my claim is that without the ‘weak’ AUD (relative to export prices) the economic decline would have been larger, and hence the decline in job advertising and hence the rise in the unemployment rate.

In conclusion, the reason that i think the RBA ought to cut their policy rate is that the level of the AUD is becoming ever more inappropriate as the level of export prices declines. Easing monetary policy sooner will prevent an unnecessary and undesirable increase in the unemployment rate.