Today is the keenly awaited Q4’12 Capex report. The prior report showed an ongoing increase in current activity but signalled an approaching peak in mining investment.

As a result of this (and doubtless liaison with the big investors) the RBA cut their capex forecast in the Q1’13 SOMP. 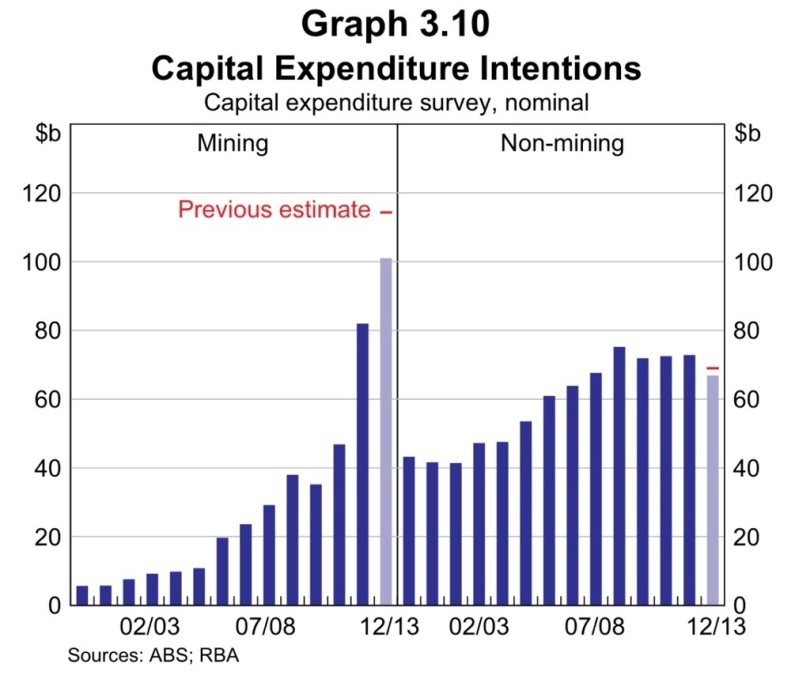 With the RBA maintaining an explicit easing bias, the question really is what capex number would get them to act on that bias and to cut rates.

I think that clear evidence that the investment boom was about to end abruptly might get a rate cut in March. It would have to be clear enough that investment was anticipated to decline in both the mining and non-mining sectors.

Right now, while i judge that things remain subdued, i can also see that the prospects of the non-mining sector have improved markedly. Financial markets have delivered a big easing of financial conditions (via asset and securities prices, and issuance conditions). This seems to be worming through confidence and ought to show up as increased demand.

Related to this easing of financial conditions is the ‘unofficial rate cut’ business already obtained in Q1. Corporate borrowers often borrow at a margin to the 3m bank bill swap rate, and due to the improvement in financial market conditions, this rate fell from ~3.1% after the Dec rate cut to a low of ~2.9% in mid Feb.

So while i do agree with Terry McCrann that a bad number could cause a cut in March, it would have to be a very bad number – for the RBA is already expecting a modest decline in investment over the projection period, and markets have already eased monetary conditions (which is a substitute for further policy easing by the RBA).