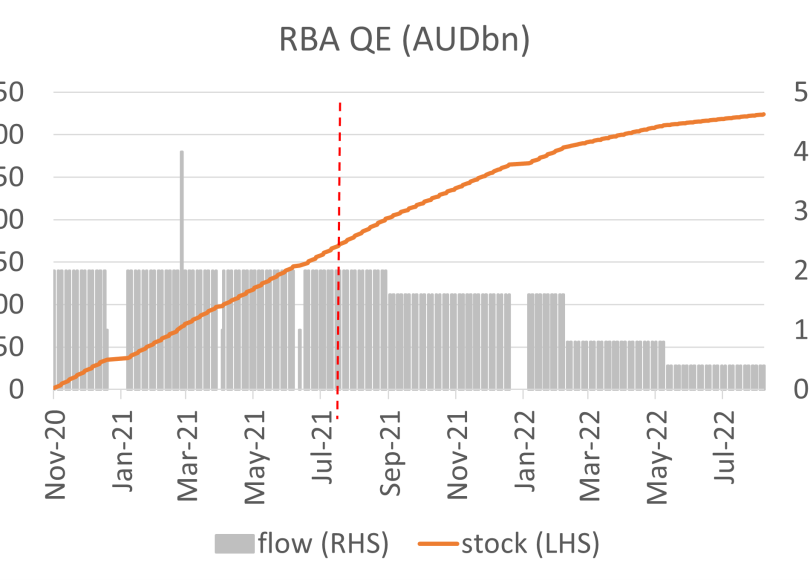 The RBA upgraded from ‘recovery’ to ‘expansion’ and reduced monetary accommodation on 6 July. In different times, the minutes to this meeting would be key in judging the outlook for monetary policy (notwithstanding the Gov’s two speeches since the meeting). However, the current COVID outbreaks, and consequent lockdowns, mean that we’re probably back in ‘recovery’ mode, and the minutes won’t shed light on this. So they are somewhat dated.

The current Winter 2021 COVID outbreaks are the biggest (COVID) challenge Australia has faced since the initial outbreaks in H1’20. They change both economic forecasts and the operating environment for monetary policy. The lockdowns mean that Q3’21 GDP may be negative. A negative GDP print means that the RBA’s current assessment will be downgraded back to ‘recovery’ from ‘expansion’ (after only recently being upgraded to ‘expansion’). Faced with the difficulty of predicting the virus, the Board will have less confidence about the outlook, place greater emphasis on scenarios (and in particular COVID-scenarios), and be more careful about doing anything that could slow the recovery and delay the resumption of the expansion. This should change QE-taper forecasts.

My guess is that the 6 July decision to slow the pace of QE from 5bn per week to 4bn per week was a close run thing (though freezing YCC at April’24 was probably easier). Given subsequent events, there’s probably some regret about the decision to slow bond purchases (though the hurdle to change that decision before the November review is HUGE). These decisions would have been informed by updated (preliminary August SOMP) forecasts. The actual August SOMP forecasts, the ones the Board will be looking at when it meets on 3 August, are likely to be both weaker and less certain than the ones that informed their 6 July decision.

However, reaching the upside forecast of 6%yoy in Q4’21 now seems unlikely. This requires ~1.25%qoq growth per quarter in H2’21. A contraction in Q3’21 seems more likely. This would make even the 4.75%yoy in the baseline scenario from the May SOMP hard to hit.

At the time of the RBA’s 6 July meeting, the NSW lockdown was minor, and expected to end on 10 July. The NSW lockdown has since been extended twice (first for another 7 days on 7 July, when the daily case count was 27; and then to 30 July on the 14th, when the daily case count was 97), and restrictions were significantly hardened as of 17 July (daily case count 111), with all non-essential retail forced to close, and construction and maintenance work required to ‘pause’. Today’s case count in NSW is 98. And the current Victorian lockdown has been extended past the initial snap five day lock-down (though we don’t yet know for how long).

Against this backdrop, a modest contraction in Q3 seems plausible. Further, if the lockdowns drag on, and infect confidence in the recovery, it may be hard to get the economy back onto the ‘high confidence’ consumption and investment path that characterized the recovery so-far.

Speeding up vaccinations will help, but aren’t a full solution to this problem as the baseline is eradication (which is why Australia locks down on such smaller virus numbers). it is notable that case numbers are rising in the USA and UK, despite much higher rates of vaccination.

With this in mind, I don’t think much should be read into Gov Lowe’s observation that “once an outbreak is contained and restrictions are lifted, the economy and jobs bounce back quickly”. The Board had only just made the important monetary policy decisions for 2021, and the hurdle to tweak the pace of QE before November 2021 is high, so Gov Lowe’s best contribution was optimism.

With the August SOMP forecast likely to be weaker than the numbers the RBA was looking at when they decided to taper in July, further tapering of QE at their 2 November meeting seems unlikely. This boosts estimates of the final size of QE, and the peak in Surplus ES balances.

Assuming that the RBA reviews QE at the quarterly forecast meetings, the path of QE seems likely to be: 4bn /wk in Nov’21, taper to 2bn /wk in Feb’22, taper to 1bn /wk in May’22, with an end to purchases being announced at the Aug’22 meeting. This means final size of QE will be around 325bn (or about 160bn more than present, above chart). It follows that ES balances will peak at around 500bn in Q3’22 (the RBA’s repo book is only 7bn just now, and I don’t think it can shrink to zero).

The risks around these numbers seem to be to the upside just now. In particular, the resurgence of infections in countries with higher vaccination rates further delays the likely date of re-opening.