Regular readers will know i have a soft spot for John Cochrane – and while he over-eggs it a little when having a go at Krugman at times, he is one of the best on the stuff that matters in the long run.

His latest post is a review of Bob Gordon’s paper Is Growth Over. In it, Cochrane makes the appropriate point that in the long run even level shocks are unimportant relative to getting the growth stuff right. 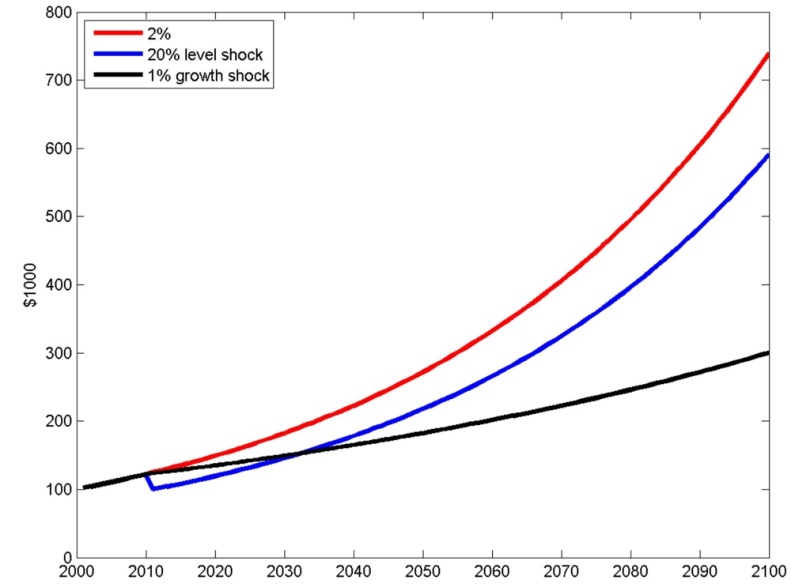 His chart, posted above, shows the improvement in average earnings in the case of compound 2% annual growth (red), a 20% level shock that does not alter the 2% CAGR assumption (let’s call it a GFC), and a shock that lowers growth by 1ppt to 1%

Charts like this are, to me, the strongest argument against ad hoc Keynesian ‘stimulus’ policies – in the long run the only thing that matters is the rate of return on our investments.

Though it does not always have to mean waste, stimulus often means waste (badly allocated capital). In the present case we have also got some bad regulation thrown in – sneaky protectionism is rife across the globe, as are wasteful ‘strategic investment’ subsidies.

In the context of large accumulated debts, this is a disaster – long run growth is the best way we might shrink those debts as a proportion of GDP, and ultimately pay them off.