there has been a lot of confusion – particularly in rates markets – about the meaning of the discount rate hike. Bernanke said clearly that it was not about tighter policy – but didn’t explain what it’s about. 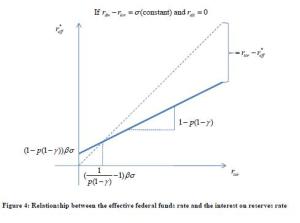 What it’s about is limiting the sag between the interest on reserves rate, and the effective fed funds rate. With about 1.1tn of excess reserves in the system, and 10bn of primary credit, the re-normalisation of the spread (to 100bps over fed funds, from 25bps over) will have an impact on less than 1% of the funds market. This is a non-issue when considering the stance of policy – especially as the fed will probably open the TAF at the first sign of trouble.

A higher fed funds – discount rate spread increases the penalty for being caught short funds. At the margin, this will increase desired funds in deposit facilities, which will stop the funds rate from sagging so much below target for a given rate of interest on reserves. The thinking behind these moves is fully laid out in this 2009 FRBNY paper.

So yes, this is a preparation for raise rates – but there are many more preparations to come. The FOMC doesn’t want to announce higher rates and then have nothing happen as excess reserves are just too large. That would make it look like they couldn’t control the stance of monetary policy.

For what it’s worth, i don’t think they co 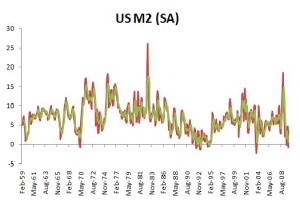 uld raise rates tomorrow if they wanted to. There’s simply too much in the way of excess reserves.

If i’m right about the US being at the edge of a deflation problem, i wouldn’t be surprised if they end up buying more assets. Did anyone else notice that M2 is falling? Just like in the great depression… buying assets is the only sure way to prop it up.