Scott Sumner at the money illusion blog has been writing some interesting stuff about negative rates and policy. I was going to write this as a comment at his blog, but have also been looking for an outlet to open these issues here, so I figured this was the perfect excuse.

First of all, let me say I have no problem with price level targeting in theory, but I do have a major problem with it in practice – bond markets are smart, and if you credibly announce an intention of inflation of 10% for 5yrs (say to catch up to your 2%y/y target) long bond yield would shoot higher.

Under such a scenario, in the US, 30yr conforming mortgages rates could easily exceed 10%, and the US housing market would then double dip – taking the economy and the banks down with it. This is because bond markets are full of smart people; they will see the inflation you’re planning shortly after you announce this policy. This is a very real, and practical, impediment to such a policy. It would also hurt the banks indirectly (due to mark to market) as they are sitting on mountains of fixed rate MBS in their mortgage books, and increasingly own loads of long USTs.

As an aside, this is a good reason the BoJ has avoided such a policy. Announcing a 2% inflation target might send 30yr JPY yields to 5% – which would both crush the fiscal authority under the weight of their interest burden, and send the banks broke (they hold loads and loads of JGBs).

This brings me to the question of negative despot rates at the fed – Sumner’s topic. I think this is a very bad idea, because the US banking system is broke and needs the earnings from depositing their excess reserves.

Sure, a negative deposit rate would discourage banks from holding excess reserves at the Fed, but each 25bps reduction in the interest on excess reserves rate would also cost the banking system about 2.75bn a year of risk free profits (there are ~1.1tn of reserves).

At its simplest, the fed did QE because US banks were insolvent. They had too many assets and not enough capital – so the fed gave the banks the only perfect risk free asset (cash) and took their unwanted risky assets (taking the credit risk and inflation risk off the banks).

The banks had two reasons to raise capital. They had too many assets, and not enough capital (due to writedowns) The fed helped them out of the jam buy buying the assets. This prevented a fire sale – which protected the banks from further markdowns – but it also gave them mark-ups on their asset books. These profits diminished their need to raise equity capital.

The banks raised a substantial amount of new equity capital despite this. Even with this double helping of capital, banks as a collective unit do not have the balance sheet to take the assets back once again.

You can see this because the fed has had to arrange to do repos with third parties in order to drain the reserves they injected via these open market operations. The banks are only capable of taking a few hundred bn of assets in repos before they are full up. 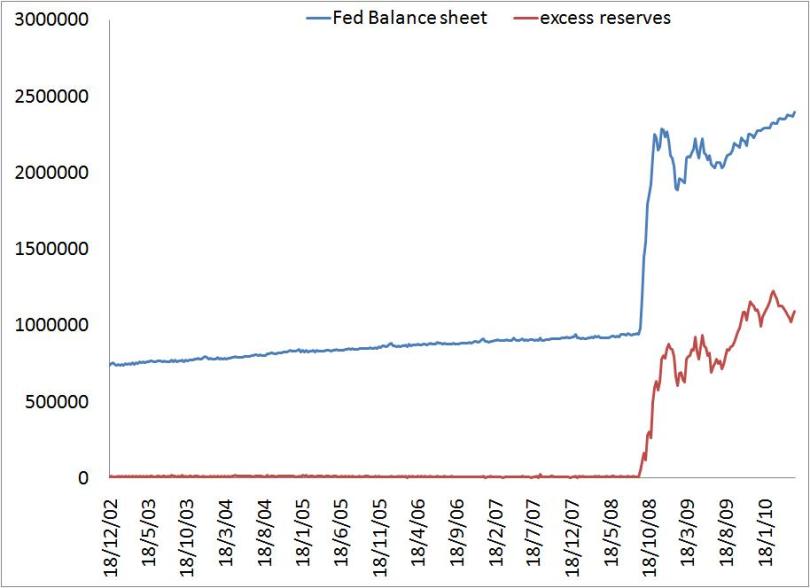 This suggests that they also have a limited ability to write new loans – because they lack the equity capital required to support new lending on the truly massive scale that their holdings of excess reserves would support.

The banks, collectively, have sufficient reserves to lend about 80% of US GDP. Their 1.1tn of excess reserves will support ~11tn of new lending.

This is easy to see – US banks would have to hold 10% of reserves against the deposits that would be created if they wrote that cash out as a loan (assuming all the deposits thereby created were held as ordinary transaction deposits).  The 1.1tn of initial loans would generate a need for 110bn of reserves. This leaves 990bn over, which can be lent in the second round: and so on, until total new lending is 1.1tn. The potential expansion of lending is larger to the extent that some of the deposits thereby created are held as a time deposits.

Banks can make excellent spread in writing such loans (conforming MBS is ~500bps) – why are they not doing so? I think it’s because they are broke. They can’t take the potential losses – they need more equity to be comfortable taking credit risk (and interest rate risk) once again.

This equity depletion would do more to hamper bank lending than the additional 50bps spread available to them due to the higher opportunity cost of foregoing writing new credit. Better to recapitalise by buying their equity, than punish them with a Dracula policy that will impede their ability to take risk.