I’m getting a few comments about the decline of the manufacturing sector. I love this topic because it allows me to riff off about those who don’t check their facts, as well as those who don’t understand economics. 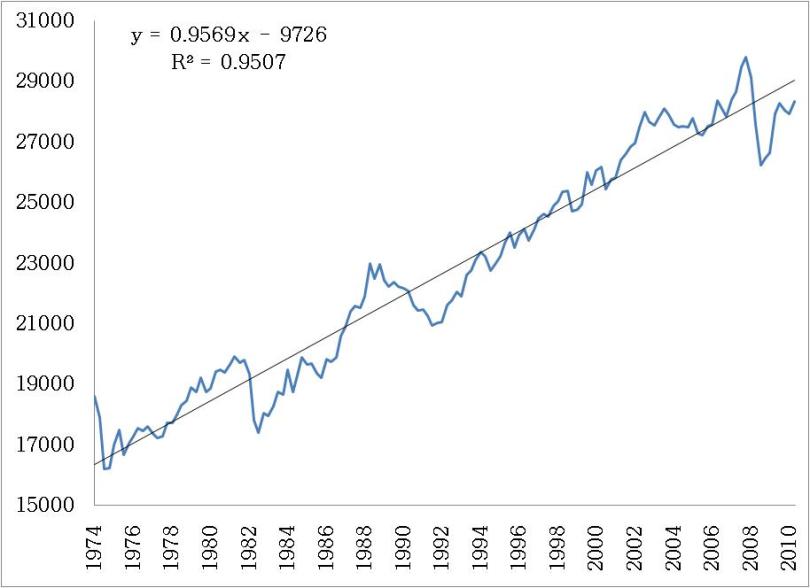 First of all, Manufacturing is not declining. The above chart shows industry gross value added (real). As you can see from the chart, Manufacturing has been growing around the same boring trend for the entire data set. It grows slower than the rest of the economy, that’s why it is shrinking as a proportion of GDP. 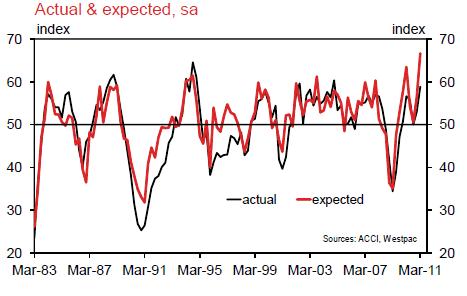 Second, Manufacturers recently told us that they are feeling pretty good just now. The above chart is from the ACCI-Westpac Manufacturing survey (a bit like the US ISM). The Q1 survey reported that Manufacturers were experiencing good times, and expected the future to get still better.

“The Actual Composite Index jumped 6 points from its December 2010 level of 52.5 to 58.9. That level of the Composite Index is in the region indicating strong expansion … The Expected Composite jumped by 10.3 points in March 2011 and is at a record high.” 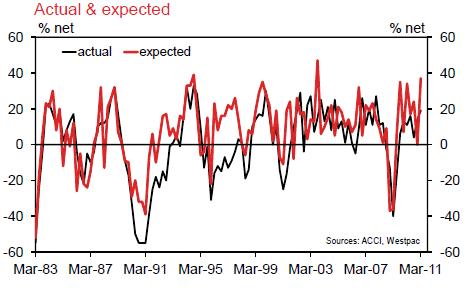 Manufacturers also told ACCI-W that new orders were looking pretty good – and that they anticipated a spectacular improvement was expected in Q2.

Perhaps new data will prove me wrong — as the AUD has got a bit stronger since Q4 / the ACCI-W survey.  However I doubt it – things were going well at parity.

I expect that the AUD will hurt some (import competing firms and exporters) however it will help some by lowering the cost of their imports (both inputs and capital equipment). Myself, i’ll be surprised if makes all that much difference.

There are very few sharply non-linear results in economics – a 10% nomiinal appreciation is more likely to temper enthusiasm than trash.

A tempering is what we ought to expect, and desire.

Finally, even if manufacturing was contracting (and it’s probably not) we should not shed tears. Standard trade theory tells us that a relative price shock will expand the sector that benefits at the expense of the other sectors (in the link, it’s a two sector model, so think of it as mining and the rest of the economy).