I love the City to Surf.  Being a fun run, it is not only a lot of fun, but also a great leveler.

Every year, I am overtaken by someone who has the look of someone I should be beating; and sometimes I even overtake a few who look like they ought to be beating me!

I especially enjoy this aspect of fun runs: they remind me that there is more to everyone than the things I can see.

For a few reasons, this year’s event was special to me; and as I have a bit of time, and the inclination to try some new tricks, I figured that I would post a few charts. 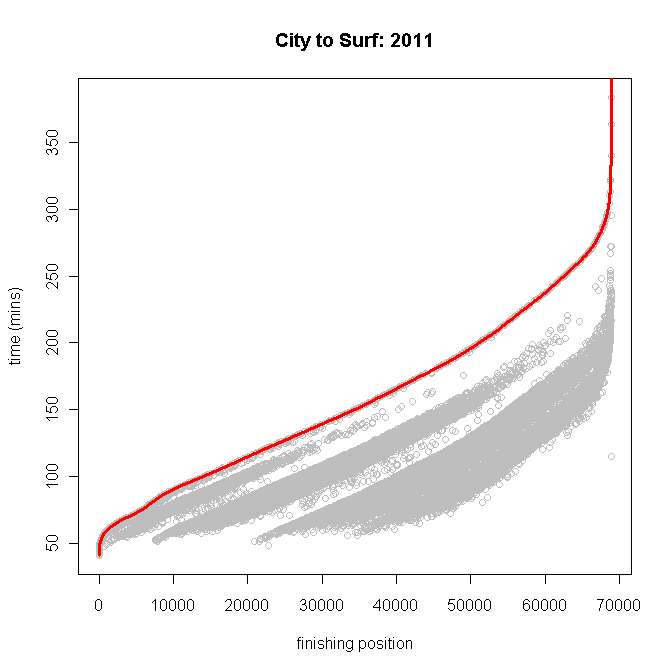 First up, here is a point-chart of times by finishing position. Note how the staggered starting waves create tide lines in the finishing times and ranks — there are clearly some fast runners in the back of the pack, and some slow ones in the front groups.

The grey points are net-time (from your bib-tag), and the red line at the top is gross time (time on the official clock). Thus, if you finished (say) 30,000th your personal time is a grey point (at 1hr 13m 04s), and the official city-to-surf clock read 2hr 19m 27s when you crossed the line.

Men are pretty competitive from 16 to 39, but after that we tend to slow up a little.  The fastest runner this year was the 20-29 division, however the 30-39 group outperforms on average.

I am surprised to see how much variation there is in Women’s results. Performance improves markedly as women move into the 20-29 division, is steady in the 30-39 division and then falls away similarly sharply thereafter.

As in the male case, the fastest women was in the 20-29 division, and the fastest group was the 30-39 division.

Women’s ranges are notably wider than Male ranges. At least in part, I put this down to the prams I see so many super-mums pushing up heart-break hill. That’s love…

I scraped the data from the city-to-surf website using the below Python script. This is my first attempt at Python code, so please comment with suggested improvements.

There are two bugs in the code of which I am aware — please help me fix them?

First, when a name string has unusual characters (Scandinavian names, for example) it crashes. Second, when there are missing strings (division was sometimes missing – I suppose some folks like to conceal their age) there is no ‘a’ tag, and so the parsing gets all mixed up, which eventually causes a crash when the for loop tries to ref a string that doesn’t exist on the page.