Our fearful Treasurer delivered the 2011-12 MYEFO (Mid Year Economic and Fiscal Outlook) today, and as expected the Treasury forecast the long-promised return to surplus in 2012-13. The forecast is now for a statistically insignificant 1.5bn surplus for 2012-13.

I doubt it. To begin with, their growth numbers are too high: they have global growth ~3.5%y/y. It’ll be lucky to be above 2%. Once you mark that section to market it’s a deficit for sure. In this scenario, the terms of trade are likely to be materially lower – and MYEFO sensitivity analysis suggests that each 4ppt decline in the terms of trade trims 6.6bn from the bottom line in 2012-13.

This window-dressing has generated an unusual zig-zag pattern in spending growth.

It follows that the ‘blowout’ in the 2011-12 deficit was partly a matter of choice. They chose to ‘kitchen sink’ the 2011-12 budget, to make it easier to attain the 2012-13 surplus to which they have tied their political fortunes. But if things weaken, expect the focus to be on how bad Europe is – like in 2008, they’ll pin the tail on the rest of the world (and fair enough).

Thus, policy decisions as well as parameter variations have added to the deficit in 2011-12 (as you can see above); and after this, policy changes help combat the parameter weakness in 2012-13 … but it’s not a proper baseline. 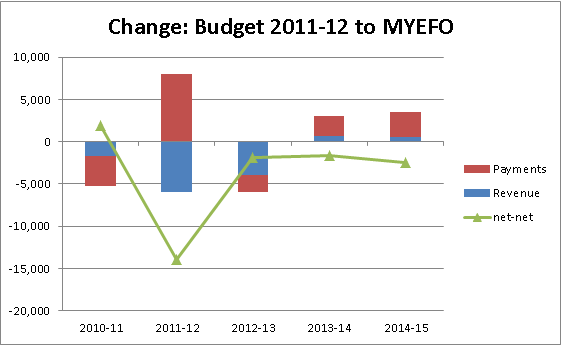 I prefer my chart (above): it more clearly shows the dollar change in the value of reciepts and payments between the May 2011-12 Budget to today’s MYEFO. On this chart you can clearly see the spike in payments in 11-12 and the consequent drop in payments in 2012-13. Hey that’s not a fudge — it’s Government’s privlidge.

If you have a keen eye, you may also be able to see that payments are actually higher in the MYEFO than in the 2011-12 Budget. That’s because they’ve added some stuff in. 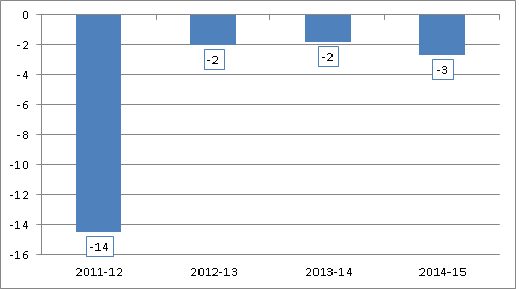 The interesting thing about the budget is that the Government didn’t try very hard to pressure the RBA into cutting agressively. The softening of the global outlook is probably sufficient to get a cut in Dec in any case, so they didn’t have to try. The absence of either a materially weaker growth forecast in the MYEFO, or a much more agressive fiscal tightening, means that the Government gave up the opportunity to press for a 50bps cut.

Never say never – it’s ceratinly possible if Europe blows up – however just now, i’d think that the RBA is merely going to give the market -25bps to 4.25% next week, and that they’ll explain it as moving the cash rate back to neutral. Save the Eurogeddon story for next year, when they may need to explain larger moves.

Treasury needed to keep the growth assumption up to maintain the surplus forecast – however i also suspect the ‘official family’ remains modestly optimistic about the outlook.

I’ll be surprised if decoupling is true this time … fool me can’t get fooled again.