The Fed meeting just concluded is probably the most important meeting in the 10yrs or so that I have been following the institution.  The meeting establishes Bernanke’s legacy, and signals a new direction for global monetary policy (where the Fed leads others will follow).

The Fed now has a single point target of 2% for inflation, and publishes the monetary policy (Fed funds rate) assumptions on which the economic forecasts (GDP, unemployment and inflation) are based.  All this is in keeping with the best academic opinion on such matters.

A point forecast for inflation is easier to explain and easier to understand, and that ought to both stabilise the economy and make monetary policy more potent.

An explicit inflation target makes it easier for a central bank to be more aggressive in circumstances like the present. An explicit inflation target reduces the cost of aggressive monetary easing, as it reduces the probability that the monetary authority will lose control of inflation expectations. As a result, it improves the tradeoffs associated with easier policy – particularly when experimenting with non-standard measures at the zero lower bound.

Bernanke was careful to say that the Fed has a dual mandate – maximum employment and stable prices (which means 2% PCE inflation). However, the more Bernanke said (he answered a few such questions), the clearer it became that the Fed ‘model’ has only a short run trade-off. Thus, the main influence of the unemployment part of the dual mandate is that it shapes the glide path back to the 2% inflation target following a shock.  Again, this reflects the mainstream of academic opinion – there is no long run trade-off, but monetary policy can have short run impacts on real variables.

The Fed’s Statement of objectives was not specifically designed to knock the NGDP-target school, but it’s worth teasing out the consequences of the FOMC view about the potential for such a policy given the popularity of the subject.

Compare this on inflation:

The inflation rate over the longer run is primarily determined by monetary policy, and hence the Committee has the ability to specify a longer-run goal for inflation

with this on unemployment:

The maximum level of employment is largely determined by nonmonetary factors that affect the structure and dynamics of the labor market. These factors may change over time and may not be directly measurable. Consequently, it would not be appropriate to specify a fixed goal for employment; rather, the Committee’s policy decisions must be informed by assessments of the maximum level of employment, recognizing that such assessments are necessarily uncertain and subject to revision.

Translated: the Fed thinks it can hit an inflation target on average over time, but does not think it can reliably influence real variables. The problem with an NGDP target is that it puts an equal weight on something they control, can hit (on average over time), and can measure with something they do not control, cannot hit, and cannot measure. The point target for inflation and the range for the NAIRU reflect the relative ‘controllability’ of these two objectives.

The difference between the controllability of the two aims is key when weighing the costs and benefits of NGDP targeting frameworks (or similar).  Fiscal and regulatory policy are the main influence on the supply potential of the economy (and hence the NAIRU) – not monetary policy.

NGDP target advocates say that it’s basically what we’re already doing, as the policy merely bundles up the full employment and 2% inflation objectives – but as the NAIRU is moved by Governments, such a bundling would necessarily involve regular central bank judgements on the quality of Government regulation – as they these would move NAIRU estimates (just imagine the fights about labour market regulation!).

In any case, most folks who want NGDP targeting merely want further easing – and that’s what they are probably going to get. The new framework and forecasts have laid the groundwork for a further easing of monetary policy.

Why not ease right away? Well, no one is very good at forecasting that far ahead, and the recent data has looked a little better, so the Fed is going to watch and wait for a while.

And in any case, saying you’re on hold for longer (the first hike has moved from mid 2013 to the end of 2014) is an easing of monetary policy. 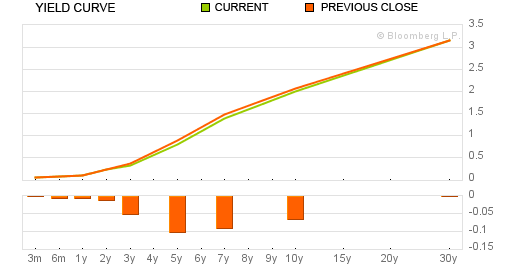 It seems logical that this change of policy had its greatest impact on the 5yr point of the US yield curve.  Short rates cannot fall further, so it’s the belly of the curve that should rally – and it has done so.

At the long end, I think that the Fed’s commitment to 2% inflation, hints that easier policy may be forthcoming, and indication that the long run neutral fed funds rate is ~4% — which is well above long term bond yields (10yr USTs are presently ~2%, and 30yrs ~3.15%) — give reasons for the market to sell off.

The 10yrs sector is a tough call, as the Fed might buy more of them; but certainly 5*30 should be steepening. If the economy improves so that QE3 is not required, i think that US 10yr yields should rise (5*10 make sense).

I am wary of reading much at all into the TIPS market moves, however the sharp move wider in break-evens over the past few sessions suggests to me that Bernanke has successfully engineered an easing of monetary conditions.