The release of the July PCE report received very little attention last week – mostly due to the fact that Bernake’s Jackson Hole speech loomed so large.

With Bernanke having made a case for further easing, it is now time to pay attention to the data … not least because the data will have framed Bernanke’s thinking.

The big news was from the PCE deflator. In headline terms, inflation has collapsed. In annualised terms, the July pace of inflation was ~0.1%y/y, and the core (ex food and fuel) measure was ~0.3%y/y (that is, if we had a year of months just like July, headline inflation would be 0.1%y/y, and core inflation ~0.3%y/y). 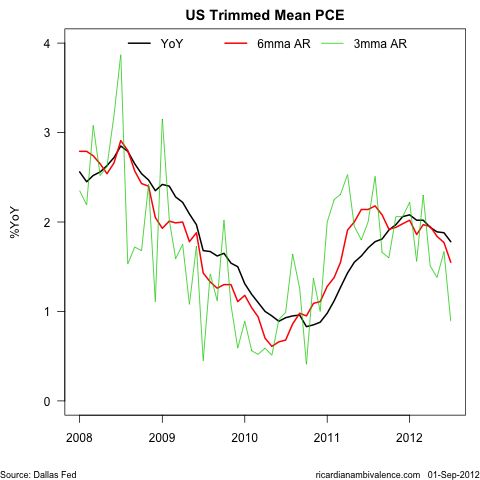 With a third of the global economy already in recession, US growth sub-trend, and unemployment rising, it’s hard to see inflation accelerating.

I see rising deflation risks – and suspect that the Fed shares this assessment.

The high unemployment rate alone makes the case for further action, and the modest pace of inflation leaves plenty of scope to act … but in the absence of further action, I suspect that rising deflation risks would make their own case toward the end of 2012.