Over the weekend, I read Tyler Hamilton’s tell all, The Secret Race. The book is a cracking page-turner, and I enjoyed it, but I don’t think Hamilton comes off all that well.

The Secret Race the book refers to is the drugs race — however the book might just as well have been titled ‘Tyler’s secret hate’. The subject of his hate being Lance Armstrong.

So why hate Lance? Because he won. Tyler does his best to bury it in the book with tales of his hard-working and honest family character — however it’s fairly clear that (probably like all cyclists who work that hard) he believes that if the playing field had been level he would have beaten Lance.

There are three narrative crescendos in the book.

The first is when Tyler bests Lance’s time on a climb the Postal team used as a benchmark. Following this Lance has Tyler cut off inside the team — cut off from the drugs etc. This is how Tyler ends up leaving Postal. This was clearly the best thing for Tyler’s career, but Tyler is still annoyed about it.

The second is when Tyler is set up to beat Lance in the 2004 tour. In this tour, Tyler is leading his own team, and performing well, but takes a fall on an early stage and is unable to give his all after. This Tour, and the narrative leading up to it, is supposed to demonstrate that once the playing field is level (or nearly level, Hamilton insinuates that Armstrong was on better drugs all through the book) Hamilton was the better rider.

The final narrative crescendo is around Hamilton’s efforts to have Armstrong prosecuted as a criminal for using performance enhancing drugs. My strong sense is that, unable to beat Armstrong on the bike, Hamilton was determined to see him beaten ‘off the bike’. 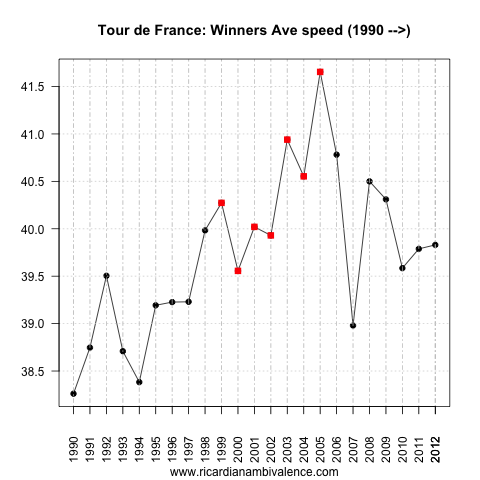 Looking at the average speeds of the tours that Lance won (marked red, above) it’s true that they look a little high relative to the surrounding years — but i am not persuaded by either the book or the average finishing speeds that Lance was on better drugs than everyone else and that’s the main reason he won seven tours.  Hamilton’s book has simply persuaded me that Armstrong was the most focused rider of his generation.  The guy was a nutter for winning the tour — perhaps that’s what it takes? 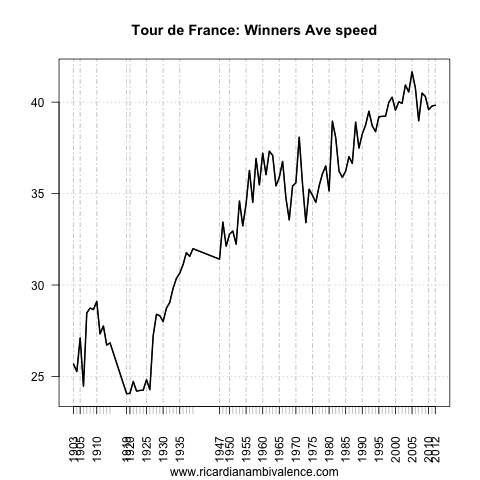 Looking at the long sweep of tour average speeds, it’s hard avoid the sense that folks have been ‘cheating’ for some time — and that they continue to do so.  The sharp up-trend from the 1980s to 2005 includes both the move to ‘professionalism’ and the better application of science in sport — but I find it hard to believe that the drugs the riders were all on in 2005 were only worth ~2km/hr, and that the rest of the gain has been sustained as it comes from better science.