Capital resumed pouring into Japan in the week ended 18 May 2013, suggesting that my ‘reversal’ call was premature — the prior weeks data may have been distorted by the uneven effect of Japanese holidays (uneven in that they may have a different impact on Japanese and foreign activity). 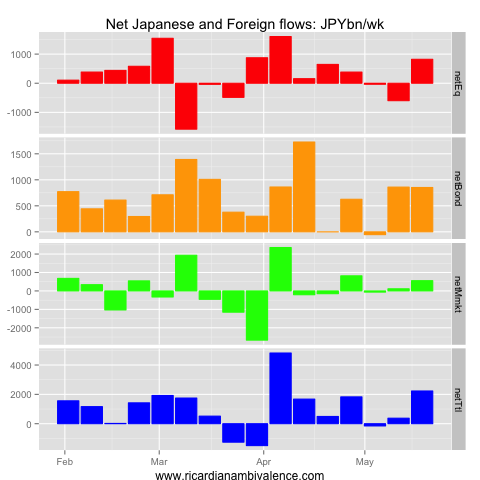 Capital flowed in through each of the three securities that the MOF tracks: equity, bond and money channels all delivered capital inflows. 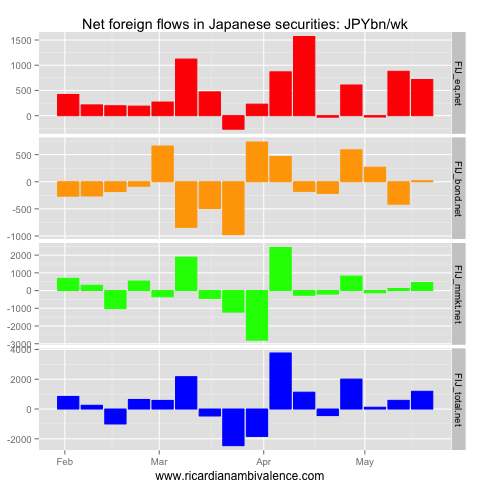 On the foreign investment in Japan side, it remains the case that it’s the booming Nikkei that’s drawing capital into Japan. Bond flows were flat, and money market flows never amount to much on net over long periods. 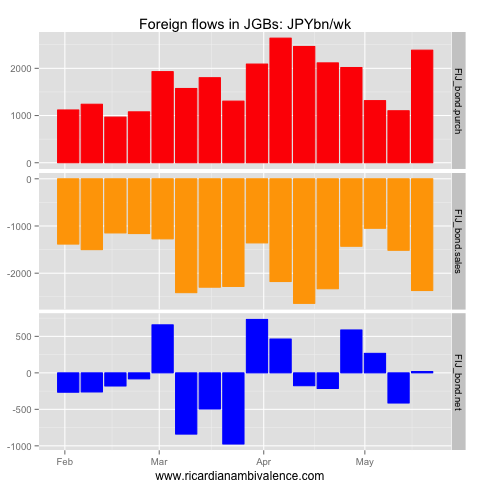 Foreign flows in the JGB marke were about flat i the prior week — with an increase in both purchases and sales. 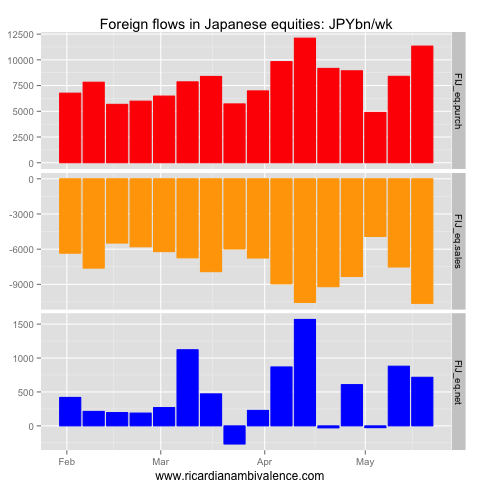 However there was a more marked change in the equity market, where foreign purchases of Japanese equities picked up by more than foreign sales, leading to another week of firm inflows (Y716bn, down slightly from Y880bn the prior week). 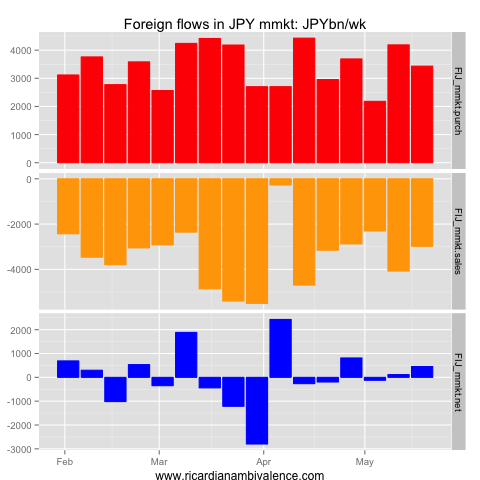 Net money market flows were a decent Y454bn, up from Y115bn the prior week. 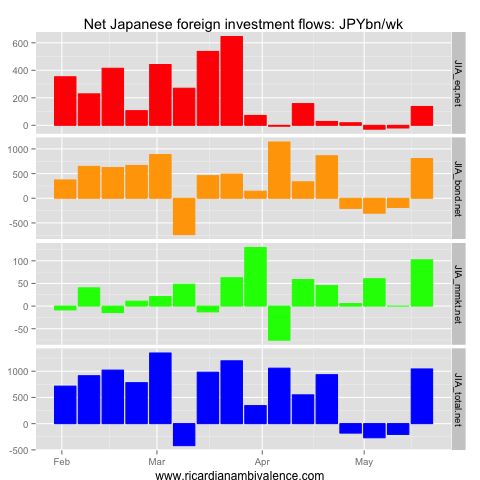 The sharp change was in Japanese activity across securities. Japan resumed net-selling foreign assets (equities, bonds and money market instruments) in earnest in the week ending 18 May, yielding a chunk net inflow of ~Y1tn. 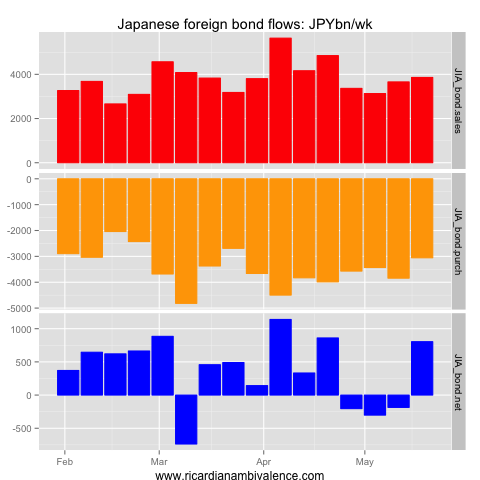 Bond sales and purchases both picked up — but bond sales more so — leading to a net capital inflow due to bond transactions of ~Y800bn. 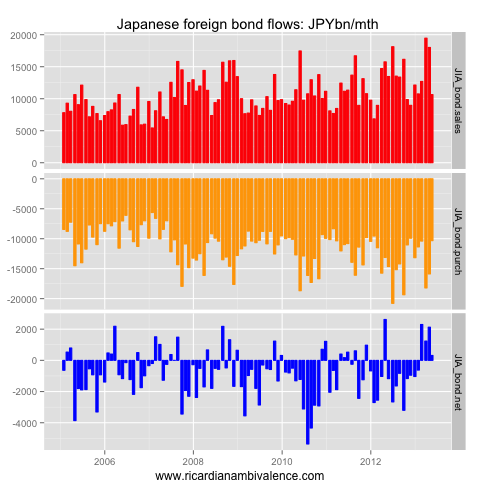 The above long term chart gives an idea of how unusual this is — for the longest time, Japan had always been a net-buyer of foreign bonds. JGBs have backed up quite a bit since the BoJ started this adventure, so perhaps foreign bonds lack the attraction — but i still think this is a temporary change. 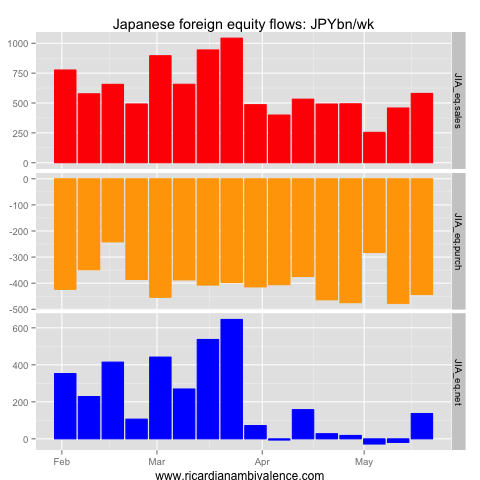 Japanese equity sales also picked up somewhat in the prior week and purchases declined slightly — the net result was a modest net capital inflow of ~Y140bn. 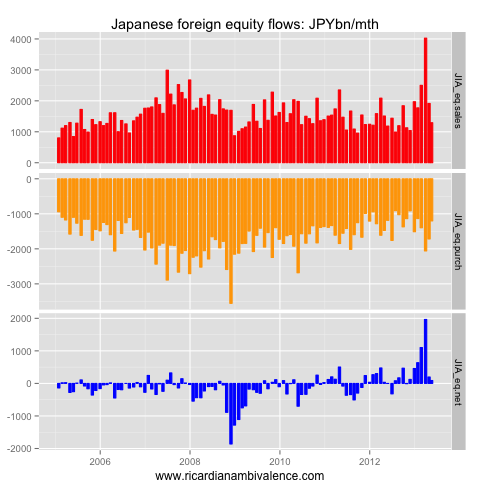 As in the case with Japanese foreign bond transactions, the above long term chart shows how unusual it is for Japan to be a net seller of foreign equities. For the longest time, they had been net-buyers of foreign securities. 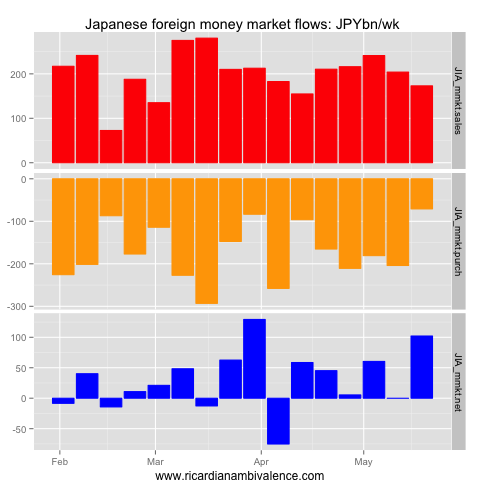