Today’s Q4 retail trade release had a little something for everyone – however on balance I disagree that it makes a case for the RBA to ease their policy rate by 25bps, to 4%, at their February meeting.

The main reason I am unconvinced is I assess the inflation pulse as running ~2.5%,  see growth as around trend, and can find no global data or events that mean the RBA must downgrade their global growth or financial market assessments.

Global data and financial markets have arguably improved since the RBA’s December meeting — when they eased policy 25bps, but described it as a close call. 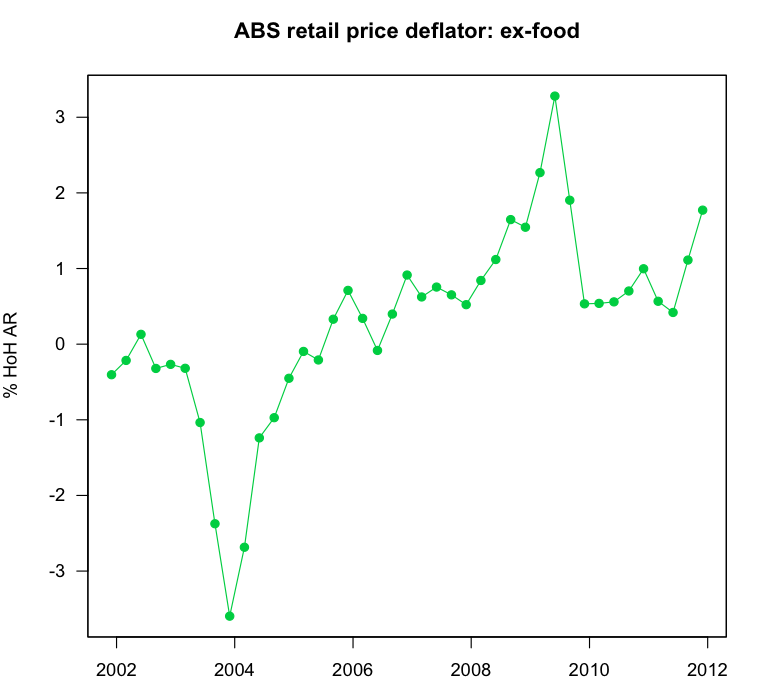 The key to my outlook is my assessment of inflation. If I believed that inflation was truly running at ~2%y/y pace, I’d favour a cut. A key reason to doubt this is captured by the above chart. It shows the (implied) retail price deflator, excluding food prices.  This measure of inflation shows that Q4 retail price inflation (ex food) was 0.44%q/q, (down ~10bps from 0.55%q/q in Q3).  Taking the two quarters together, this suggests that underlying retail price inflation H2’11 was running ~1.8%y/y.

The median spread between the retail price deflator (ex food) and trimmed mean CPI has been ~60bps since Q3’01 (the post GST period), so that means that it’s probably the case that core inflation pressures were running around 2.5%y/y in H2’11, and not the 2%y/y pace that you’d get if you simply annualised the Q3 and Q4 Trimmed Mean CPI prints.

My view on inflation in 2011 is that CPI was biased up by supply shocks moving the AS schedule to the left in H1’11, and has now been biased down as the AS schedule has moved back to the right.  The true underlying pace is ~2.5%, and it has been there for about the last six quarters.

So current inflation pressures are just where the RBA wants them.

As for the outlook, the economy looks to be presently running around trend – the unemployment rate is steady around 5.25% and has been there for some time.

Various labour market indicators are consistent with a steady unemployment rate – and if anything, today’s 6% increase in the Jan ANZ job ads report suggests that the unemployment rate is more likely to decline than rise over the next few quarters.

That means that the RBA is just as likely to be revising up their inflation forecast as revising it down in 2012. And recall that assuming a 4.5% policy rate, the RBA forecast that inflation would be in the top half of their target range in H2’13 (when policy has had it’s full impact).

My best guess is that the RBA will hold their overnight policy rate steady at 4.25% tomorrow, and that they’ll publish growth and inflation forecasts that are substantially unchanged in their Q1 SOMP – released this Friday (10 Feb).

I think the RBA is waiting for more information – and are willing to ease further only once they can see evidence that it is required.