Chris Joye linked to our post on the cost of FX intervention: which got the readership up… It also got the ire of Mr Stephen Koukoulas of Market Economics.

So much so that he started his tweeting about it. I don’t follow twitter, but I found them amusing – so I’ve pasted a few below (for those like me that don’t watch this sort of thing).

Well, it’s true that I didn’t count the gains from the mark to market on the FX assets in the case that the foreign exchange value of the AUD declines.

First, that’s because they are highly speculative. The above chart shows the RBA’s valuation gains and losses over the past few years — this includes both interest rate risk and foreign exchange risk. It’s hard to make a buck in this game – the portfolio has been costing them money of late.

Clearly, they would have done well on their duration (they hold USD, EUR, JPY and CAD), however that has not been enough to overcome their FX losses.

Second, that’s because the RBA’s foreign exchange assets would have to be sold and AUD re-purchased if the RBA was to realise their mark to market gains and pass the profits across to the Federal Government (which is likely to increase the foreign exchange value of the AUD once again … doh!).

Again, the SNB’s experience is relevant.

The SNB started intervening to cap the strength of EURCHF in March 2009. At the time, they told the market that 1.50 was the line in the sand. They have since added ~300bn (~50% of CHF GDP) to their foreign exchange assets. Despite their initial interventions, EURCHF appreciated to cap out at 1.04.

The only reason it’s 1.20 now is that the SNB went Rambo on them, and said that they will do YOUR SIZE at 1.20 on EURCHF. 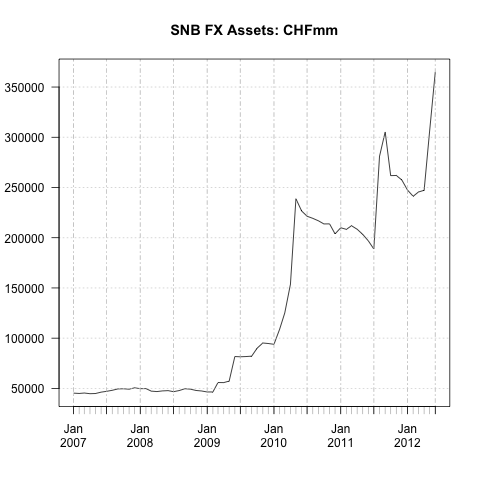 As a result of this all you can eat approach, they SNB grew their FX Assets by an incredible ~120bn (~20% of GDP) between April and June 2012. Now they own a lot of bonds at super low yields – and have oodles of duration risk (as well as FX risk if they have to let 1.20 break — which they would do if the EUR collapsed).

Holding all things constant, the RBA would need the AUD to depreciate by 2.25% per year, each and every year, to break even on this trade.

Basically, the AUD would have to follow the forwards. How likely is that?

Carry trades are typically profitable, so historical experience suggests that the RBA will lose money if they sell the AUD and buy lower yielding foreign currency denominated debt …

If yields were to increase sharply, the value of the RBA’s assets would decline, and this would make the required FX depreciation (to break-even) a little larger.