The Japanese Business paper Nikkei reports that the Bank of Japan will kick off their easing campaign with Y1.2tn of JGB purchases this week. The indication is that their purchase programme will be a reverse tender process — just like the one the Fed has used.

The memo posted following the 5 April decision, contains a schedule that shows the tenor buckets they plan to buy at each OMO — but not the exact days. Expect prices to squeeze up into the buybacks, on the days that one has been announced (most likely ~10am Tokyo time). 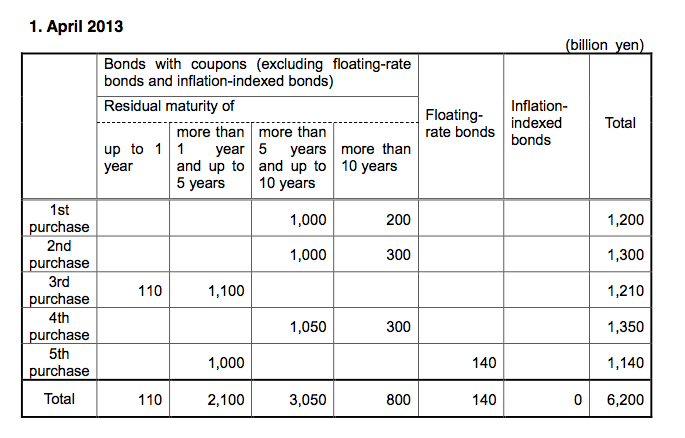 In April, the BoJ plan on buying ~Y6.2tn of JGBs in five OMO. The above schedule shows that it will be mostly in the 5yr to 10yr sector. In subsequent months, there will be six OMOs, and purchases will be ~Y7.5tn (the May schedule, below, shows ~Y7.4tn per month, with the majority in the > 5yr bucket). 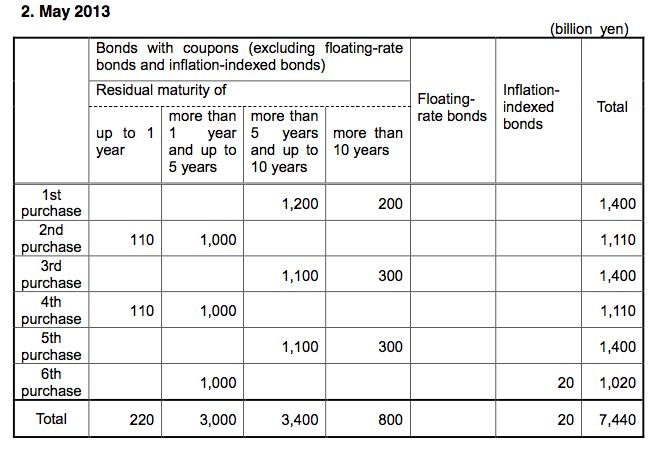 There’s already some odd stuff floating about wringing hands about what it might mean if the BoJ is unable to buy Y1.2tn of JGBs.

In my view, this point of view misses the point entirely. It doesn’t matter.

Japanese Banks already hold Y47tn in BoJ current accounts — so there is no sense in which they are reserve constrained in their lending. Thus, the quantity of base money the BoJ supplies is unimportant.

What is important is the market’s assessment of how committed the BoJ is to their policy framework. If the market REALLY believes the BoJ, and does not bid Y1.2tn of JGBs into the reverse auction (so that the BoJ is unable to buy Y1.2tn of bonds at any price) does it matter?

No, because if they happens, the BoJ will have hit all bids, and their known excess demand for JGBs will cause the market yield on JGBs to decline even further — a victory for the BoJ!

The import of the base money growth target is that it commits the BoJ to a policy over time (in this case a purchase plan) — this gives their policy rule credibility.

Should JGB yields collapse on day 1 due to a ‘failed’ buyback it would signal that the policy has very large credibility.

Sure, that means the BoJ will have supplied less base money at the first auction, but that’s not important. If this auction fails, they can ‘catch up’ later.

So if we do see a failed buy-back the JPY should weaken and JGBs ought to bull-flatten, as it will show that the BoJ’s new policy already has strong credibility. The better the credibility, the lower yields ought to be, and better the policy will work.