The April non-farm payrolls report surprised on the high side, with 165k jobs added (the bloomberg median forecast was +153k) and the unemployment rate falling 10bps to 7.5% (mkt was unch at 7.6%).

The revisions were extremely positive, with March revised up 50k to 138k, and February revised up 64k to a whopping 332k.

This is around the +173k jobs per months average of the last year, and it has taken the three month average to 212k (the fifth month in a row that the 3m average has been above 200k).

This is a result that’s fairly consistent with recent trends in the labour market, though further gains of this kind are required to get the FOMC to consider reducing the pace of their balance sheet expansion.

A 6m average that’s sustained above 200k per month for about a year is probably required to persuade the FOMC to change their policy, and after the revisions we can say for sure that we’re moving toward that target.

The household survey showed a similar increase in employment (+293k), however this survey is not as positive in trend terms (the 12m average is 137k).

The household survey remains weaker than you’d expect given the strength of the establishment survey.  It should balance out in due course (when all the revisions come in) — if you’re looking for the weakness in this data, it’s in the household survey that you’ll find it. 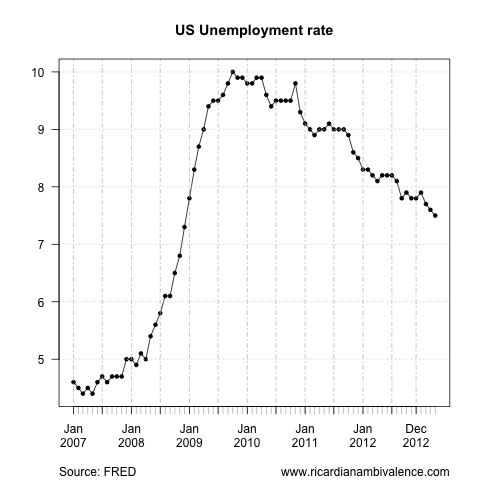 The unemployment rate continues to trend lower (it has been a remarkably smooth decline, if a fairly gradual one), and this time it fell for a good reason — more people in work. 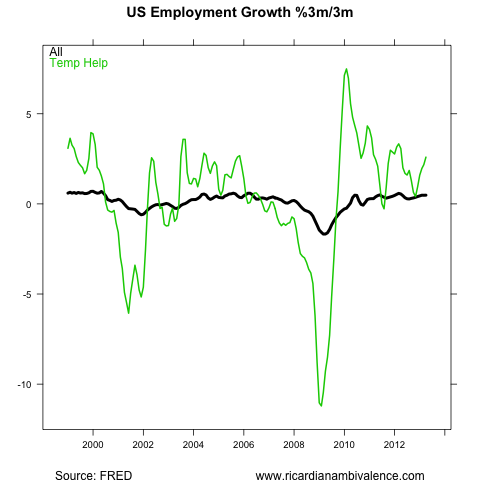 However, the signs are good outside that sector also, with ‘temporary help’ jobs also growing strongly.

All up, this is a good payrolls report.  Combined with the decline in initial claims, it seems possible that we’ve navigated the worst of the Q2 data slump.