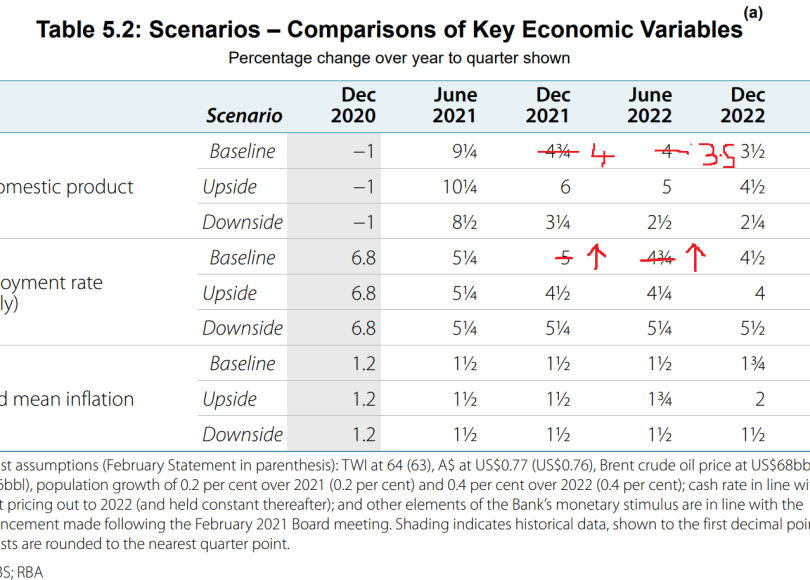 The AFR’s excellent John Kehoe has made (semi-) official what I had only guessed at yesterday: that the RBA regretted their 6 July decision to slow bond purchases to 4bn per week. If the RBA wants to ram this point home, they’ll use the minutes to their 6 July meeting to confirm that it was a close decision.

John goes a little further than I had figured, saying not only that the RBA would not have slowed the pace government bond-buying, but that they are considering walking the decision back. The tone of his article suggests that this is a live decision at the August RBA meeting.

In light of the article, I judge that this is very likely (say 75%).

This makes sense in the context of the likely revisions to the economic outlook. Whereas on 6 July, when they decided to taper, the Board were probably looking at forecasts that contained an upgrade to a new central case that was around (or a bit better than) the upside scenario in the May SOMP. Following the lockdowns, the new central case will be a bit weaker than the central case from the May’21 SOMP.

It will probably feature a mild contraction in Q3, followed by a probable (but uncertain) rebound in Q4 (putting GDP around 4%yoy). Given the lower level of Government support, and the more infectious nature of the delta variant, I think confidence in the recovery will be reduced.

Of most concern is the existential nature of the shock. Of course things will slow down for the period of the restrictions — but will the recovery be so strong this time? The most important question is if this new shock will damage confidence, causing households and firms to be persistently more cautious (meaning a higher household savings rate and less business investment). Higher caution will delay the return to two-point-something inflation, and extend the period of both QE and ultra-low rates.

While John’s RBA-scoop is very informative, by far the most important part of John’s story is the quote from an anonymous Government source. After discussing the problems caused by the highly infectious Delta variant, John quotes this source as saying “we are in a new world”.

If that is true, the YCC’s not dead … it’s just frozen. The RBA may yet extend the YCC target to the November 2024. After all, Gov Lowe described YCC as “a successful monetary policy measure” on 6 July.

I think things would have to get worse for a YCC extension to happen, but I don’t think it’s a zero probability (and it’s worth noting that I figured the hurdle for walking back the QE-taper was too-high yesterday). Merely opening the door to a YCC-extension, by noting that they retain the option to extend YCC to November 2024 should the economic circumstances warrant it, would provide further support to the economy.

Finally I don’t think the lower AUD is a reason for the RBA to delay a monetary policy response. The AUD is down because the market believes that the RBA will react. If they don’t react the AUD will start rallying. Far better to surprise the market by reversing the QE taper in August, and reminding people they may yet decide to extend YCC to the November 2024 bond.

The RBA should reverse their taper and remind the market that YCC’s merely frozen at April’24 on 3 August. I think the QE change is a 75% probability, and the latter is around 50%.