A friend who attended a conference in the USA reported back that he was surprised by how uncomfortable many monetary policy heavy-hitters were with the current fiscal-monetary policy regime. Given this, i guess it is not all that surprising that a group of policy names (Greenlaw, Hamilton, Hooper, Mishkin) presented a paper on the risk of fiscal dominance at this year’s US monetary policy forum.

1/ that current fiscal settings are unsustainable;
2/ that tipping points are hard to predict;
3/ that once a tipping point has been crossed a monetary authority must choose between inflating the debt away or allowing the government to default; and
4/ that the risk of such an event is increased as the Fed balance sheet grows larger.

The paper comes to two (marginally) related conclusions. First, that once debt to GDP rises above 80% that the risk of an adverse feedback loop increases. And second that a period where the Fed makes a loss is already likely and that such a period will make the central bank more vulnerable to fiscal dominance. 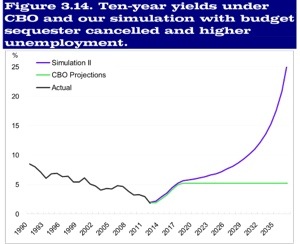 First, the feedback loop. The authors get some wild US 10yr yields by allowing the current account deficit and increasing debt to GDP to have european consequences. Smart as these fellows are, i am not sure that the experience of serial defaulters with a marginal attachment to a pseudo gold standard is a match for the global reserve currency and an issuer that has never defaulted. Sure, the coefficients have the same sign, but i think that they are probably much smaller. 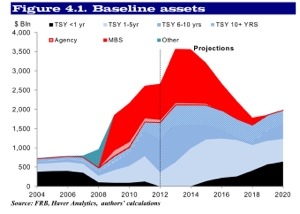 Second, the capital position of the Fed. In this case they take the above asset portfolio. Stress it with the below interest rate scenario. 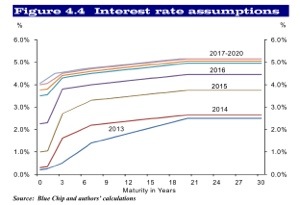 And come up with the below income trajectory. Note the income shortfall in some years. 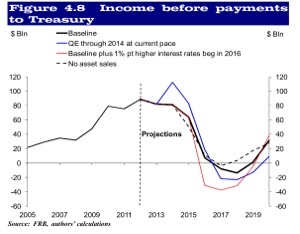 This leads directly to the question of central bank capital: do they need it, and does it matter if they make a loss?

The short answer to both questions is yes, but the full answer is more subtle and complicated than many realise. The main asset held by a central bank is not their reserve asset fund, but their ability to monopoly issue the currency. That gives them a seignorage income that has a value that is related to demand to hold the money they issue. So long as the losses do not exceed the NPV of this income, they are not truly insolvent — they just appear to be in a short run book-keeping sense.

So why does it matter at all? Well open market operations that lose money are typically also bad policy (in retrospect), and too many of these and the faith in the central bank — and therefore demand to hold the currency they issue — will decline. At the limit, folks will cease to demand to hold the currency at all, and the NPV of the seignorage income (the so called franchise value) will fall to zero.

If this happens, then the central banks losses are the taxpayers. Fortunately, they are probably denominated in the old (worthless) currency; unfortunately, there has probably been an enormous loss of wealth (and welfare) associated with the collapse of the old currency.

Such things are the meat of fiscal dominance. They are typically caused by fiscal problems, and typically end with fiscal reform (see Sargent).

How does this relate to a few years of losses at the Fed? If the fed wants to pay the bills it has to keep the carry on the portfolio up, which means keeping their funding cost (the overnight rate) low — and that policy would tend to increase inflation, and dig the Fed’s hole deeper as its assets (being long term bonds) would then decline even further in value. It could also borrow from the banking sector (by creating reserves, they are a liability of the central bank), which would also tend to be inflationary as it would increase the banking sector’s ability to create credit.

We are, however, an age away from that. What the Fed currently faces is an inconvenience, which they can arm themselves against by withholding treasury remittances, or the Treasury can fix later by giving them Treasuries (the fed gets the USTs as a an asset on the asset side, and so the balance sheet balances the capital fund goes up on the liability side).

In any case, the fed could get by on credibility alone even with a few years of heavy losses, and many years negative capital. The USD is unlikely to be challenged as thereserve currency. In all probability the USD would remain in good demand, so long as the Fed kept inflation relatively low, US financial markets remained well regulated, and congress kept at least scratching at their fiscal problem.

The reason i believe this is that everyone understands why the Fed has such a large balance sheet and what it is trying to achieve. At least just now, it does not look like a broken system. The fed has clearly purchased extra GDP at the risk of losing a small amount of its capital. The taxpayer is in a position to recapitalise them.

Nowhere in the Fed’s mandate does it say that optimal policy is always profitable in a narrow book keeping sense. The fed has been trying to grow GDP (the Treasury’s ultimate ability to repay) and they appear to have done a decent job of it.

So i doubt that US fiscal policy and monetary are about to collide. i do, however, think that the Fed is becoming less comfortable with their current policy of buying 85bn of assets each month. I now think the quantity of asset purchases is up for discussion at each FOMC meeting.