Like most Australians, I have in recent times voted above the line in the senate — after all the ballots don’t even fit in the booths anymore. From time to time I even shopped the vote about a little – voting above the line for a non-major party.

But I won’t be doing that in this election – and I doubt that I will ever again. Why? because the senate preferences deals have become so complicated that I now think preferential voting is profoundly undemocratic. Safer to stick with a major party.

For example, as a result of dodgy preference deals, there is a real chance that Pauline Hanson will get a senate seat in NSW (though I doubt you could find 15% of New South Welshman who thought a fairly dim Queenslander was their best representative), and a real chance that one of Clive Palmer or Bob Katter will get up in Queensland (though, again, i doubt that 15% of Queenslanders would think themselves best represented by either of these ‘characters’).

If any of the above get up, it’s very likely that these inferior minds will hold the balance of power in the Australian senate — wielding a veto over law-making in this country.

The situation in Queensland is particularly perverse (you can see the senate deals done between the Greens, Katter and the Palmer United Party by following the links).

What surprised me when playing with Anthony Green’s very good senate calculator was how sensitive the outcome was to tiny changes. This is the perfect example of what’s wrong with the senate. Keating called them unrepresentative swill — and he was right.

You can see from the above chart that the situation in Qld 2010 was fairly sensible, with each of the LNP, ALP and Greens getting around the same number of quotas (the proportion of the vote needed to elect a senator, illustrated by the dark bars) and the actual number of senators elected (the light bars). This is basically how it’d look if we had first past the post voting in the senate (which is what i think we ought to change to).

There is some other spare change minor parties, and I’ve tried to leave them relatively undisturbed relative to 2010. 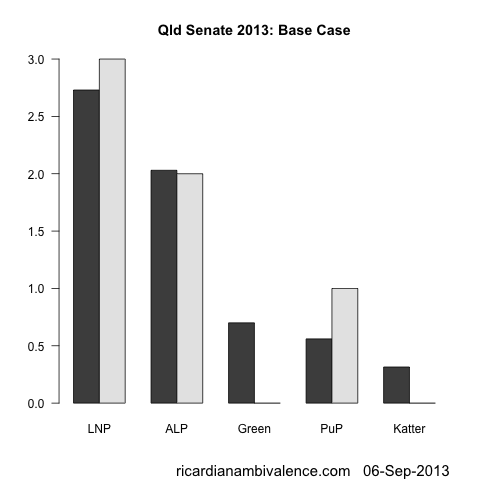 As illustrated in the Base Case chart above, after allocation of preferences this split of votes results in three LNP senators, two ALP senators, and a Palmer United Senator. The Greens were more popular, but Palmer was smarter with his preference deals. That’s tough luck for the Greens (and their supporters) given they received more of the vote.

But this situation is very fragile – look what happens if we bump the vote by a tiny amount.

Let’s say that 15 votes in every ten thousand (15bps) moves from the LNP to Katter (and why not, lots of conservative folks in Kennedy who voted for the LNP in 2010 might vote for Katter in the senate in 2013).

If this happens, the conservative agricultural folk in Kennedy (say) elect a green senator, and a Katter Senator — and bump off an LNP senator and a Palmer United Senator.

I doubt the people of Kennedy realise that the preference deals that have been made mean that a vote for Katter is a vote for a Green! My guess is that an LNP and Palmer pair would better represent central north Qld than Katter and a Green.

Next say we boost the Palmer United Party (PUP) vote by only 10 votes in each ten thousand (10bps). That is, we trim them off the LNP vote and put it toward the PUPs.

If this occurs, the LNP loses a senator to the Greens.

Palmer, after all, is a one-time LNP member and a coal and property magnate, so you’d figure he’d have done a deal that’s fairly conservative. However, as we know from Star Wars, the dark side of the force is very powerful:  so Clive has done a preference deal based on hate (such is the rift between the LNP and Clive Palmer).

Given the dodgy senate deals that have been made, and the need for stable government, I implore my fellow Australians to vote for an adult.

Vote above the line for either the ALP or the LNP — both parties are responsible, and will put the nation first.

I happen to think that the ALP deserves a thumping, and that the LNP is ready to govern – so I’ll be voting for them … but even if you have the opposite view, do us all a favour, don’t get creative in the senate.