The ABS yesterday released the first part of the quarterly labour force detail (this was the bit showing the characteristics of the unemployed, including the duration of unemployment).

I like the ratios in these reports (as usual — as i don’t trust the population benchmarks), and the ratio that is interesting in this report is the long term unemployment ratio. It is a lagging indicator by definition, but it is a good check on what one might think is going on based on the monthly unemployment release. 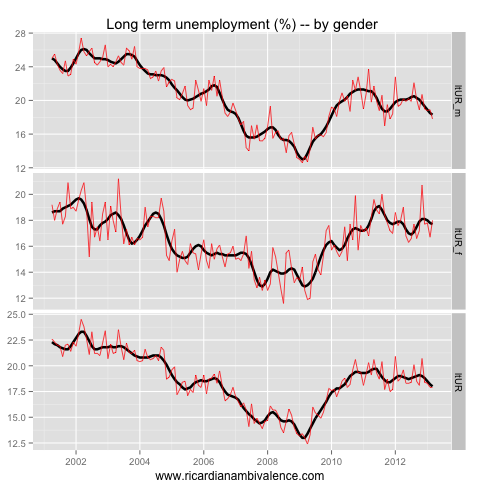 This (Q1’13) report challenged one of my assumptions about the labour market — that men were taking the brunt of the unemployment. This report shows the proportion of men who are long-term unemployed has continued to trend down. The ratio remains high, relative to the very low levels seen prior to the crisis, however it is lower than late 2011 and is trending down.

Female long-term unemployment has been stuck at ~18% for a few years now, so the population ratio is gradually trending lower. 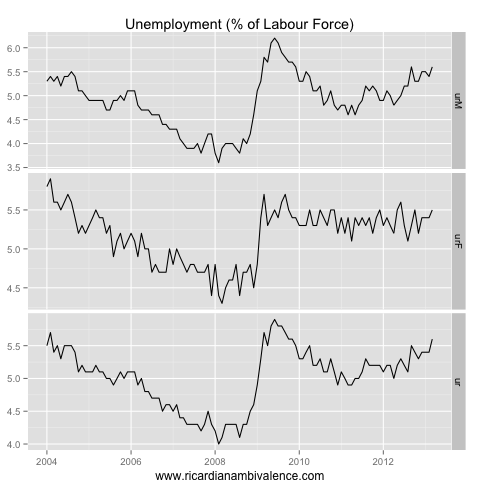 Looking at the gross flows data (from the monthly pub), perhaps another reason for this is that those who have lost their jobs (mostly men of late) have tended to exit the labour force. This may be related to redundancy payments, or perhaps is related to industry structure (self-employed construction workers often don’t ‘search’ for work in a way that satisfies the ABS’s definition of unemployed).

There is a gradual trend up in transitions from employment to unemployment, which suggests some fresh weakness — but as yet it’s only suggestive.

The worrying sign in the March data was the sharp drop in transitions from not-in-the-labour force to employment. The trend up in transitions to unemployed suggests that folks are beginning the search for employment once again — this could be a good sign (a response to a better labour market) or a bad sign (perhaps their redundancy payments are running out?).

There has been a gradual uptrend in the probability of remaining unemployed, and this suggests to me that the long term unemployed ratios ought to track up over time.