I have a bit of a love/hate relationship with consumer confidence surveys. Broadly speaking, they typically don’t tell us anything new, however if I could only know one series to gauge the state of the economy, consumer confidence would be close to the top of my list.

These two seemingly contradictory notions have a sensible link.

there is little evidence that the surveys tell us anything we didn’t already know. Thus, there is reason to suspect that surveyed respondents’ forecasts offer little more information about the future path of the economy than a weighted average of lagged economic variables

However there is this awkward fact that the RBA’s own policy decisions seems to have some relationship with the level of the index.

As you can see from the above chart, the RBA typically cuts when the index is below average, and hikes when it is above average. Why is this? Well, i think it’s because consumer confidence is a reasonable first approximation at a weighted average of the economy’s state. If we had been looing at all the data, it wouldn’t tell us anything new, but if we’d not seen it (or didn’t know how to weigh it all up) we would find the series helpful.

We see a similar relationship across the Tasman, with the RBNZ tending to ease when confidence is 110 or below, and hike when it’s above this level. 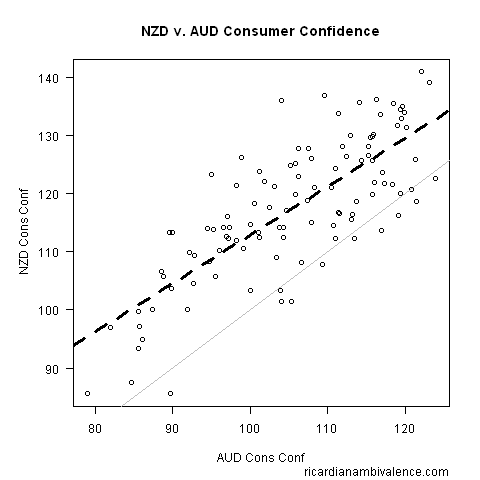 As a result, the level of confidence in both economies tends to be fairly similar (the light grey line in the above plot is the 45′ line, and the dark dashed line is the regression line).

There are still idiosyncratic / local shocks, so the relationship in differences is weaker, but i think it’s fair to say that there looks to be a degree of coordination between the two series. This is why the two series look so similar.

In general, then, we should think of central banks as typically responding to the economy (including, but not limited to the confidence data). Thus, to avoid engodeniety problems we should keep the cash rate out of an analysis when we ask: what might confidence surveys actually measure?

I think, for the most part, that you have a little over half the story once you know gas prices and equity values. All things equal, folks feel more confident when equity prices are high, and when gas prices are low. This works pretty well in both Australia and New Zealand. 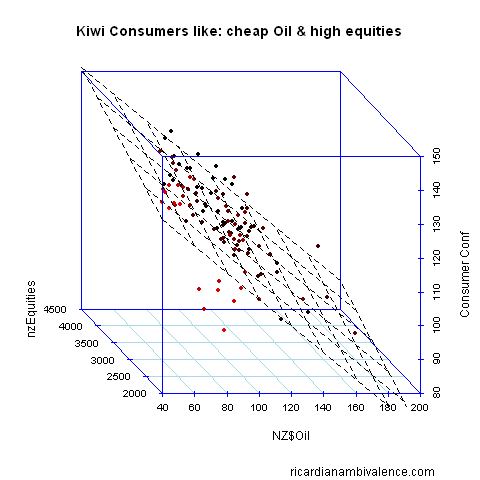 So next time you hear someone get excited about consumer confidence, ask yourself — did i already know that equity prices were up (or that gas prices have gone done down sharply).

On the basis of the above, i suspect that the sharp increase in equity prices in December and January is the reason we saw a large (concurrent) bounce in both Australian and NZ consumer confidence surveys at the start of the year. With both central banks on hold (and the RBNZ not having moved their OCR since they cut 50bps to 2.5% in early 2011), we certainly cannot put the move down to domestic monetary policy settings.

Sure, confidence is now at levels that are certainly NOT associated with rate cuts — and may be associated wtih rate hikes — but i think that’s more due to the global re-rating of risk assets that started in Q3’12. If sustained, these central banks may wish to respond to this by tightening rates to offset the easing that’s coming from asset prices, but i think that debate is a long way off just now …