This nominal weakness is mostly due to the predictable impact of a decline in the terms of trade, which has partly been made worse by the fact that the AUD has remained higher than the historical camaraderie with the terms of trade suggested.

Given that the terms of trade are a key driver of budget outcomes, I figure that it ought to be a prime candidate for ‘prudent planning’ (the idea that you try to be a bit pessimistic, to protect against the downside).

That’s not what i see when i look at the Treasury assumptions:

The terms of trade are expected to decline by ¾ of a per cent in 2013-14 and 1¾ per cent in 2014-15, as increases in global supply, led by Australia, place downward pressure on some key non-rural commodity prices.

and for the medium term:

To make things clearer, I’ve added the short and long-term Treasury assumptions to the actual terms of trade to the below chart (along with the annual average YoY % change).

I note two things: first, that after booms the terms of trade typically move pretty quickly back to mid 50s (the average up to 2002 was 54, and the full sample average is 62); second, that this assumes that the terms of trade settle around the pre-mining boom peak of ~71. 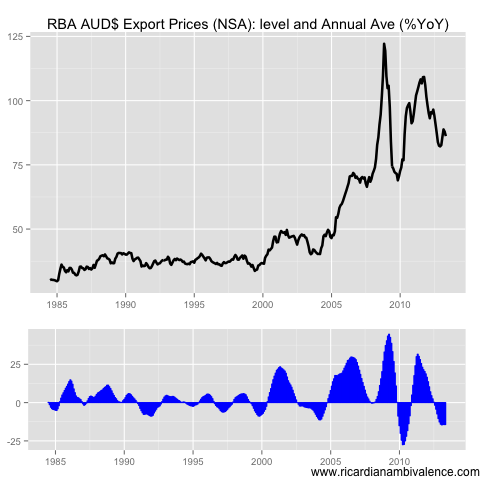 Of course, most of this is movement is due to the spike in commodity prices (our import prices don’t move much). Export prices didn’t move much for 15yrs, and then tripled, and this boosted our terms of trade .

Most researchers believed prior to this episode that the relative price of commodities would remain in a long term down-trend. They may yet be correct, and they may not — the key to managing this uncertainty is prudent planning. A good start would have been actually saving the prior boom, rather than spending it (a mis-deed for which both sides of politics share blame).

The RBA has done the definitive long-term work on the terms of trade, and they find (consistent with most researchers) that commodity prices were in a long-term relative price downtrend prior to the recent boom, and that prior price spikes have both corrected sharply and overshot on the downside to well below average levels.

As Treasury have explained, the lower the terms of trade settles the greater the proportion of the budget deficit that is structural — which means that it’s not going to ‘correct to surplus’ as the economy recovers.

This is why I think that ongoing fiscal tightening is required, despite the fact that the nominal economy is weak — I fear that the terms of trade will do what they always do, and go back to average via an over-shoot to the downside. If that’s the case, we have a deep structural deficit, and are in midst of a structural slump.

The economy is merely soft just now, it’s not dire — there is scope for modest further tightening. It will protect against the downside risk of being caught penniless if the worst happens, and the economy needs firm fiscal support.