In trend terms, the labour market remains as RBA Gov Stevens described it (when his board cut rates) in the May post-meeting statement:

Employment has continued to grow but more slowly than the labour force, so that the rate of unemployment has increased a little, though it remains relatively low… 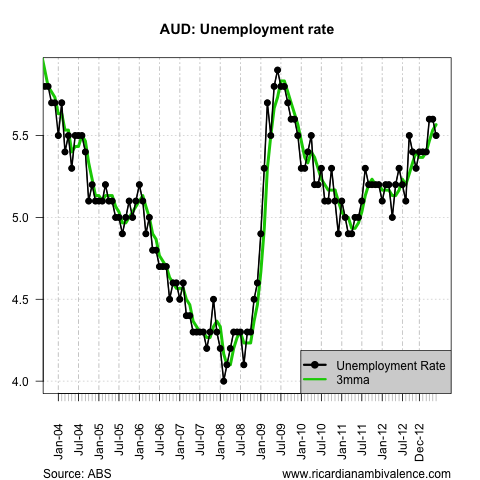 As might be expected given that the ‘weak’ anecdotes are coming from male dominated sectors (mining and manufacturing), it’s unsurprising that the uptrend in the unemployment rate is clearer is the male labour market — however it’s notable that the female rate now appears to trending up also (though it remains in the range it has been in for the last four years).

I am not much of a fan of the job number estimates, as they are sensitive to changes in the population benchmarks, so i find it more informative to look at the change in the proportion of the population that’s employed by type. 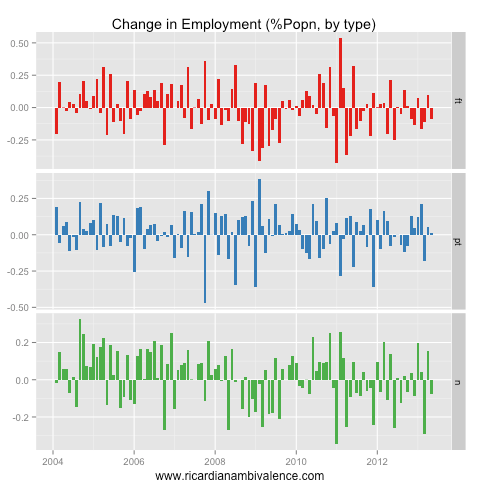 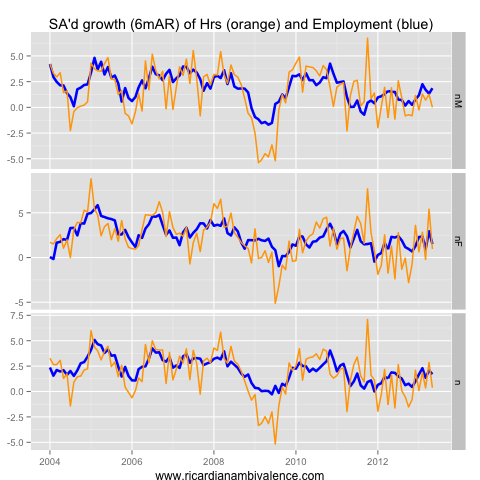 The weakness we hear about appears to be showing up (again) in hours worked. Aggregate hours worked fell by 0.7%m/m in May, due to a 0.8%m/m drop in full time hours and a 0.1%m/m increase in part time hours.  Male hours worked were down 0.5%m/m and female hours -1%m/m — reversing recent positive signs in this part of the labour market.

Removing the impact of population growth (by looking at average hours worked per head) men are working fewer hours on average now than at the prior cycle low, and women are working around the same.

All told, there appears to be ample spare capacity in the labour market, and in that context i would expect that inflation will remain low.

It is weak enough for the RBA to cut in July — without seeing the Q2 inflation data — i think so.  The trend toward lower labour demand seems clear in this data, and also in the job advertising data: the RBA hasn’t waited for the unemployment rate to spike to cut rates this cycle. I don’t see why they’d start now.