The Federal Reserve’s decision NOT to announce a slowing of the pace of their asset purchases at their September meeting caught the market by surprise. Even with Bernanke’s prior guidance that “asset purchases are not on auto-pilot”, and that the policy was data dependent, few guessed that the economic weakness would stop Sep-taper (I made the same error).

In my view, the most interesting part of the decision was not the decision to continue buying at 85bn per month — it was the 2016 projections. 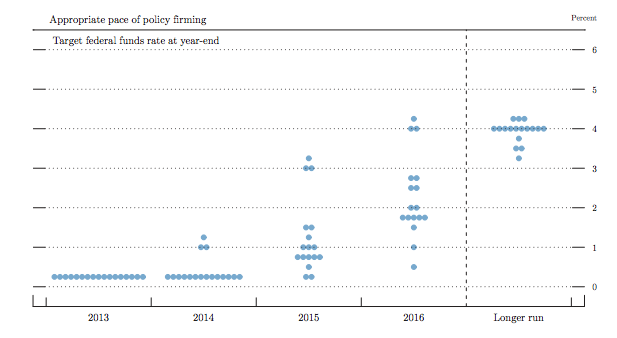 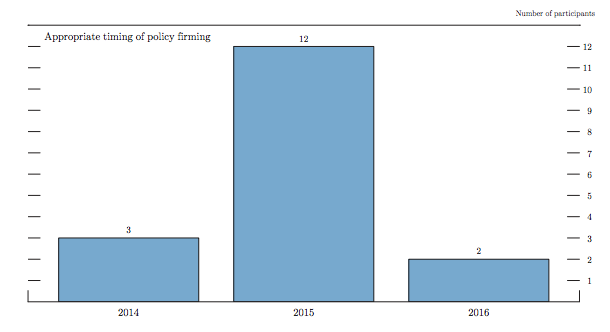 Even with the expected decline of the unemployment rate and increase of inflation, the median voter does not expect to get started with tightening until 2015 – and some think they ought to wait until 2016.

Why’s that? I think it’s because the headwinds to growth are very strong, so the natural rate has declined. Think of it as the voters saying that unemployment would be too high and inflation too low if not for easy money.

Unemployment projections were around where the market expected, with the economy returning to something like a full employment level of the unemployment rate in 2016. That seems reasonable to me.

Inflation projections seems a little too high to me. I don’t see much inflation pressure. In any case, the projections are for a pickup from here.

I have included the above projection charts mostly to give a sense of how broken the Taylor Rule framework is just now.

The technical way of saying this is that the natural rate of interest is lower — but i think the common sense way of saying it is that there are many headwinds to growth (both damage from the crisis, and other things such as the need for ongoing fiscal tightening) and that getting back to normal policy has to wait until these headwinds abate.

Additionally, the weaker USD has led to a stronger AUD. I think that an AUD above 95c certainly brings the RBA back into play for rate cuts. It also delays the hikes that are expected in other markets (such as Scandis and NZD) — i don’t see this as a fillup for growth, due to the Fed staying easier.

The Fed are staying easy because they cut their growth numbers.

Finally, did anyone else think that Bernanke’s coy answer about Fed leadership might be a hint that he’s staying on?