Around this time of each quarter, I keenly anticipate the release of the NZ CPI data. Over time, experience has shown that it’s a reasonable guide to Australia CPI. As best as I can tell, the Q1 NZ CPI data suggests another quarter of low inflation, at around the level of the prior quarter.

The fact that NZ and Australian CPI are so correlated ought to make intuitive sense — Australia and NZ are both small open economies, which are price takers on the tradable goods markets.

Thus, one finds strong correlation between the tradable goods CPIs — even on a QoQ basis. If you want to get fancy you can adjust for movements in FX — however AUDNZD doesn’t move all that much, so the simple comparison has most of the information. 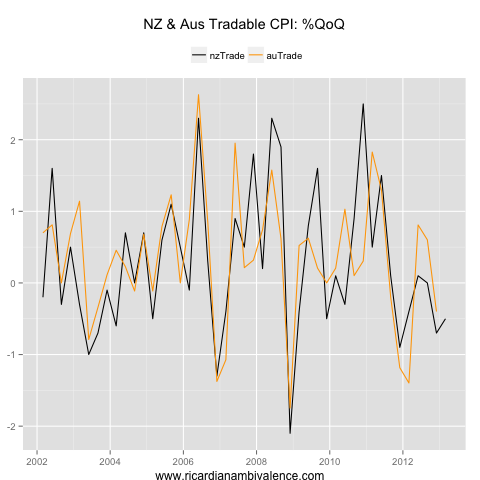 There are some reasons why you might think that the non-tradable numbers should be somewhat correlated — similar shocks hit both economies, Australian shocks hit NZ as Australia is NZ’s largest trading partner, and the labour market between the two nations is relatively open for migration flows — however it’s not much help quarter to quarter. Surely, there’s a limit to how far the two can drift apart (though the real AUDNZD rate is probably more important for NZ than AUD) — but it’s not all that much use for non-tradable inflation.

Over recent years, the (non) relationship between non-tradable CPIs has looked a bit worse than it should have as NZ and Australia have introduced policy measures which boost non-tradable inflation.

Still, it’s a good guide. Drawing the two together, it seems likely that overall CPI is likely to be ~0.5%q/q in Australia — both for headline and core measures. Low, but probably not low enough to have the RBA cutting rates in May.