[note this is the third in a series looking at the indicators for Q1’13 Australian CPI: we have also looked at the business surveys, and NZ CPI]

Forecasting CPI is a tough gig … however, due to the fact that Australian CPI comes out very late, it’s possible to get some edge from the data that’s already been released for other areas.

The RBA published a sophisticated RDP looking at this last year. I find that the majority of the benefit (in terms of forecasting Australian trimmed mean CPI) comes from using the US trimmed mean CPI number. 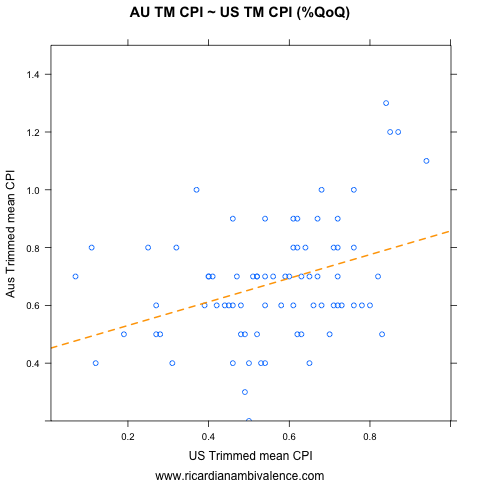 On a quarterly basis, there is an okay relationship between US and Australian Trimmed Mean CPI. We get the US data early, and you can do an okay job with just two months of data, so that allows us to make a fairly informed guess once we know Feb US trimmed mean CPI.

Using US trimmed mean CPI, and lagged values of Australian trimmed mean CPI, a forecast of ~0.6%qoq for Q1’13 drops out. This is exactly what the RBA’s Q1 SOMP implies (their forecasts are half year ended YoY rates, so the precise read is that the RBA expects CPI to average ~0.6%q/q for the next two quarters).

The QoQ model is likely to be biased up. Recent QoQ CPI results have been inflated by the carbon tax and other policy changes — so the model thinks there is more inflation momentum than is actually the case. 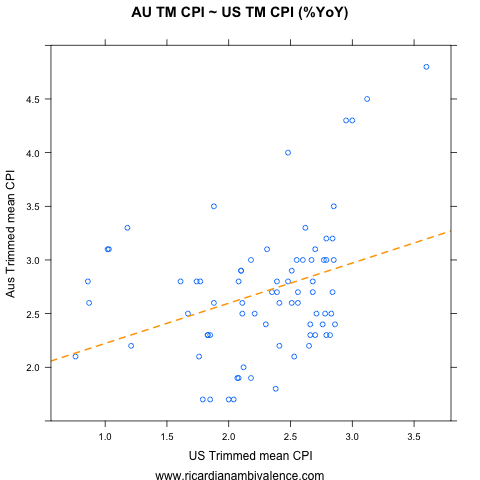 The relationship looks better with between the YoY trimmed mean CPIs (this is the case, as shocks arrive and are passed on in an uneven fashion, and YoY allows these to average out over time).

Using lags of Australian trimmed mean CPI, and the current quarter and lags of US CPI, we can do a pretty good job of forecasting Australian CPI. This model’s forecast is 2.3%y/y (which requires a 0.4%q/q result for Q1).

Taking the average of the two models — always a sensible thing — suggests that something like 0.5%q/q is likely for Australian trimmed mean CPI today. That’s low, and eyeballing the above chart, is very likely a little lower than the RBA expected in their Q1 SOMP — but i do not think it is low enough to get the RBA to cut their policy rate (the test is does demand need support?).

After all, Q2 CPI could well be a little higher, and that would push them back onto their 2.5%y/y core CPI projection for H1’13.