Amidst all the talk about US economic strength, and Fed tapering, there has been little focus on the slow hissing sound coming from measures of US inflation.

The best measure of inflation (in terms of balancing signal and noise) is the 6mAR, and on this measure, there has been no inflation over the past six months in headline CPI terms. 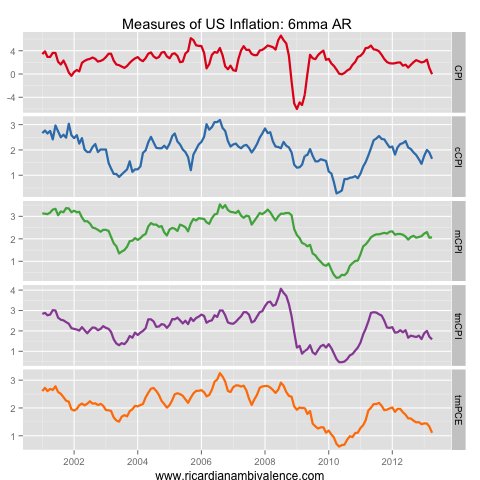 In part, this is due to headline price weakness (which has something to do with US economic strength, as that’s what boosted the USD and lowered prices). However, that’s not the full story — the various core CPI measures are around 1.75%: core CPI is 1.65% 6mAR, trimmed mean CPI is 1.6% 6mAR, and median CPI is ~2.05% 6mAR.

Friday night brought us an update of the Fed’s preferred inflation measure, the PCE deflator. This was +1.1% 6mAR in trimmed mean terms, with headline prices -0.1% 6mAR, and core (ex food and energy) prices +0.9% 6m AR.

According to some, this is due to a conspiracy of temporary factors, and is therefore poised to reverse. More importantly, the WSJ’s incomparable Fed watcher, Jon Hilsenrath, has told us that this is what the Fed thinks is happening.

Even though inflation measures have fallen sharply in recent months, Federal Reserve officials aren’t ringing alarm bells about it as they have done in the past.

Fed officials have said they take comfort that the public’s expectation of future inflation, as registered in surveys of households and bond markets, has remained stable. That implies actual inflation will stop falling.

I am not sure what the Fed is looking at which gives them comfort. While the higher frequency data (3mAR) suggests the headline deflation problem is (maybe) passing, it is getting worse at the core level. 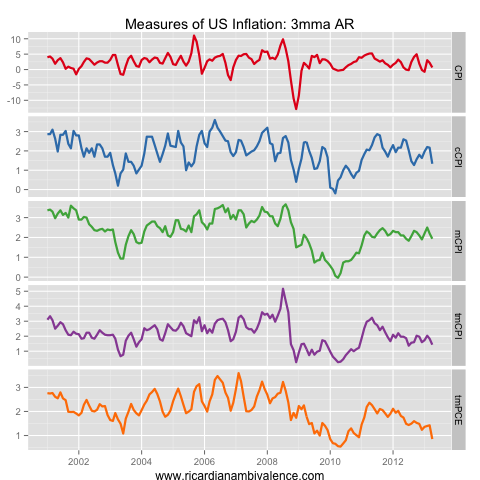 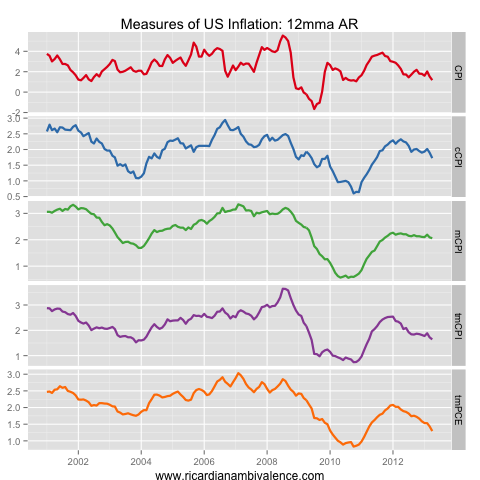 I realise that lower unemployment suggests rising inflation, but given that most of the unemployment rate’s decline is due to a decline in participation there’s scope to wait and see, especially when the risk of high inflation seems so very low.