With the drop in the AUD, assessing financial conditions is (again) becoming a hot topic. It’s a tough thing to do, because we must answer questions like: is the AUD (appropriately) weaker because the economy is weaker or is it weaker than that, so that it’s boosting things?

To get around these thorny issues, I like to look at actual financing activity — and the housing finance report is a key part of this particular puzzle. Overall, the report shows a modest response of volumes to the rate cuts to date, but poor performance of values — which reflects the basically flat house price profile this easing cycle.

Relative to prior easing cycles, activity remains subdued, and values growth weak — which means there remains ample scope for further rate cuts (i expect the next one in July).

Aggregate values (Owner Occupier plus investor housing finance) show the difference between cycles very clearly — nearly two and a half years since the cash rate peaked, and after 200bps of cuts, the total value of approvals are only 11% above the total value when the cash rate peaked in 2010. In prior cycles the RBA had generally started tightening by now, so the comparisons should start improving.

Investment has been the bright spot — values are up ~16% from the start of the easing cycle. This is nice, but is very modest next to the two easing cycles prior to the GFC cycle (the 1994 and 2000 rates peaks).

This is mostly a price-thing — owner occupier housing finance volumes (excluding refinancing) are up a decent 10% from the 2010 cash rate peak. Again, the weakness in volumes by this point is due to the fact that the RBA had typically begun tightening by now. 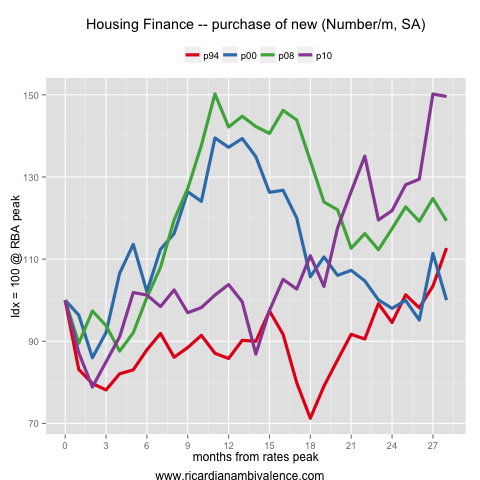 The brightest spot is financing transactions for the purchase of new homes. These are up ~50% from the first rate cut, which is better than all prior cycles.

Importantly (for employment) the pickup in home purchase applications is starting to lift construction finance applications. The volume per month is now ~10% higher than at the 2010 cash rate peak.

The weakness in values (and implied price growth), and only modest response of volumes (outside of purchase of new dwellings) suggests to me that interest rates have only recently become stimulatory. Even with the lower AUD, there’s every reason to think that lower interest rates are the path of least regret — there’s basically no sign of housing being ‘over-stimulated’.