The unemployment rate rose to 6% — exceeding the GFC peak — as the ranks of unemployed women rose (female employment had been relatively stable).

The share of the population in employment continued to slide: this measure went below the GFC low some time ago. Again, men had been taking the brunt of this downturn (they have a relatively larger share of Manufacturing and Mining, which are both losing jobs), however it’s now broadened to include women as well.

Finally, the proportion of both women and men (especially men) that have exited the labour force continues to trend higher. My guess is that it’s tough to find work, so people are just not looking.

I think the best way to measure the monthly labour market data is to look at how the share of the population is split between employment categories (part time and full time). This gets rid of the ‘inflation’ problem (an issue from the fact the population benchmarks used to inflate the survey are often wrong) that infects the jobs estimate (this is a household survey, not an establishment survey).

On this basis, you can see that the share of the population in employment has been trending down for some time, and in particular that full time employment has been in retreat since 2011 (no coincidence that this is the period in which the RBA has been easing monetary policy). 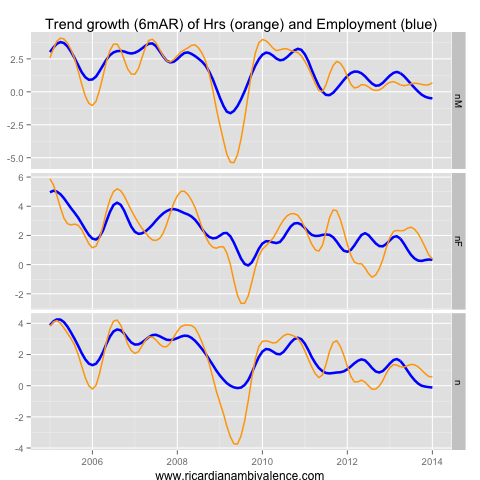 I am not sure this is such great news … I regard a move back to an easing bias as the RBA’s most likely next step.